Kilkenny, unbeaten by Limerick since 1973, had to be overcome to reach the main prize 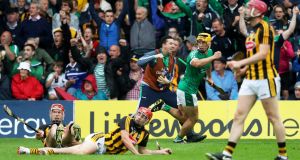 If anything captured the eclipse of the football championship by its hurling counterpart, it was this. After an early summer dominated by weekly fireworks displays in the new provincial hurling structure, this was the weekend that football was going to take over.

It saw the start of the All-Ireland round-robin quarter-finals, two days in Croke Park with provincial champions facing each other. In Thurles, however, more elemental forces were at play and even on football’s marquee weekend, hurling provided the high wire.

It was also the day that Limerick’s epic march on a first All-Ireland since 1973 reached the fork in the road: one way led to familiar consolations whereas the other had to proceed through Kilkenny, unbeaten by Limerick since that last MacCarthy Cup triumph 45 years previously.

Kilkenny were no longer the imperious force with 11 All-Irelands in 16 years but they still added up to more than the sum of their parts and had taken champions Galway to a replay in the Leinster final. For a county that hadn’t beaten them in nearly half a century, they remained a forbidding challenge.

Limerick battled hard and hurled well if imperfectly. Eoin Murphy in the Kilkenny goal had a signature afternoon, saving four almost certain goals, and the would-be champions had to win this on points.

On 65 minutes, the sense of unease that still stalks Kilkenny’s opponents crystallised in a Richie Hogan goal to push them into the lead for the first time in over half the match.

Limerick resisted and it was all square when wing forward Tom Morrissey, who had an immense match, picked up the ball on his own 65-metre line and set off on a long run with James Maher in pursuit before striking it over from the right-hand sideline. There were 70 minutes and 30 seconds on the clock.

Before the end, Aaron Gillane added a free but Morrissey’s score seemed to capture the euphoria of a first win against Kilkenny in decades.

According to an interview in the autumn, he may have watched it back by now. “To be honest, I haven’t had much time for reflection in the last few weeks. I’d say it’ll be Christmas before I get to sit down and have a real recap of the year.”

It was the day when the country’s most fervently-awaited All-Ireland came sharply into focus. Manager John Kiely was adamant afterwards. “History has no bearing on this group of players; they would never be defined by it. They’re going to set their own tone, their own direction and that’s that.”

Fit for an epitaph but more a manifesto.

Not so much a point as a continuum. The outrageous misbehaviour at club matches, that with dismal regularity flares up every autumn, shows no sign of abating. Social media has given it a baleful profile, which obliges counties to crack down hard and yet punishment is uneven at best and at worst scandalously lenient.

Yes it’s true that this isn’t unique to Gaelic games but in the well-publicised attack on soccer referee Daniel Sweeney, the miscreants were banned for 40 years. Even adjusting for less serious episodes, GAA responses to club indiscipline are consistently inadequate.