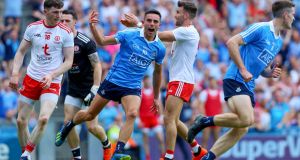 Dublin’s Niall Scully celebrates scoring a goal against Tyrone in last year’s All-Ireland final. Tyrone led 0-5 to 0-1 in the 18th minute but then conceded 1-3 in five minutes. Photograph: Tommy Dickson/Inpho

It’s surely more by design than accident that in Dublin’s last eight major games, a clear pattern of sussing out their opposition before striking with lethal intent has emerged.

There’s actually nothing between Dublin and their opponents in the next 10 minutes, 0-16 to 0-16, yet between the 21st and 30th minutes, having carefully taken the temperature of the game, they’ve then raised it to boiling point and are 19 points better off overall.

That’s 5-20 to 0-16 that they’ve outscored their opponents in this period of games, a chilling pattern of blitzing opponents before half-time that Tyrone manager Mickey Harte doesn’t need to be reminded off.

When the sides met in last September’s All-Ireland final, Tyrone led 0-5 to 0-1 in the 18th minute before conceding 1-3 in the space of five minutes. By half-time the game was effectively over.

“That appears to be the case, that they will be content to play with a team and won’t be too concerned about the scoreline in the first 20 or 25 minutes, but they do seem to have an injection then of something,” said Harte at the launch of the 20th annual KN Group All-Ireland GAA Golf challenge.

“I suppose other teams have done that in the past too. When Donegal were at their peak there was always a notion that the five minutes before half-time and the five minutes after half-time were kind of the moving period of the game for them, and they did play to that strength I do believe.

“Armagh would have been identified with a strong finish throughout the noughties when they were a serious outfit and we were meeting them. So teams do get to that level and there’s evidence to suggest that is the case [with Dublin].

“There’s plenty of evidence to show that Dublin have times when they really come at you with full force.”

Dublin play Tyrone in round six of the league on Saturday evening at Croke Park and recent outings suggest the four-in-a-row All-Ireland winners are playing to the same pattern.

Dublin and Mayo, for instance, were level at 0-2 apiece in the 19th minute of their round four league game before the hosts cut loose with an unanswered 1-4, virtually killing the game by half-time.

Against Galway in round two, the sides were level at 0-4 apiece after 29 minutes before Dublin pulled away, outscoring the Connacht champions by 1-11 to 0-3 from there on.

“Being aware of it and dealing with it is another thing, but it’s good to be aware of it,” said Harte of the trend.

“It’s to be aware that something could come down the tracks [from Dublin] just when you think you’re doing okay. It could just be the calm before the storm, we need to be aware of that.”

Harte is in his 17th season managing Tyrone and has guided them to three All-Ireland wins, taking down great Kerry and Armagh teams in the process.

He has previously discussed how he formed his outlook on the game by watching the great Kerry, Dublin, Meath and Cork teams of the 1970s and 1980s and believes that the current Dublin team are the best of the lot. That’s not to say they’re more talented than those teams mentioned but, in Harte’s opinion, they are the most difficult to beat.

“That’s an important distinction,” said Harte. “I think Dublin just pose more problems. There is more structure and more thinking that goes into them as an opposition than I believe has been spent on any other team. Other teams have lots of qualities, lots of talent and certain things that make them difficult to beat. But I think this Dublin team has a bigger repertoire of things that make them difficult to beat.

“I think Jim Gavin has to get a lot of credit for that, of course. He is the co-ordinator of all of that, and if he wasn’t there approaching it in that way, he wouldn’t have all those people around him, providing those insights and additional things that make them something different and something special. He is the leader of the orchestra and the orchestra play very well when he is around.”

Harte’s Tyrone had a strong record against Gavin’s Dublin in league games but were wiped out when they finally met in the Championship, losing by 12 points in the 2017 All-Ireland semi-final. They’ve lost twice more to Dublin since, suggesting some scar tissue may have been deposited?

“No, no, we’re not big into mental scars in Tyrone, particularly the group of players that I’ve worked with over the years,” said Harte.

“We’ve had many, many setbacks in various ways and really we don’t get scarred by results in football. We just try to learn from them and maybe in a way it makes you more determined to want to change the outcome, not necessarily to change it from a bad defeat to a win but to change it to be a better place. It is a process of trying to be better than the last time and that’s always within people’s grasp to do.”