Micheál Martin: Government want the 2020 Championships to go ahead 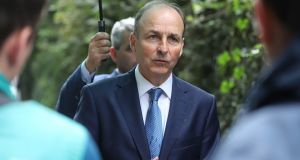 Micheál Martin has insisted he wants the 2020 All-Ireland Championships to go ahead. Photograph: Damien Storan/PA

The extension debate continues - Taoiseach Micheál Martin expressing his belief that every effort should be made to accommodate a 2020 championship beginning at the end of October, no spectators or otherwise, suggesting it would be “a symbol that the country is fighting this virus”.

While GAA president John Horan also confirmed that the Association supports the running of inter-county championships this year, if they are to take place, he started they won’t be held up to accommodate counties who find themselves in any coronavirus lockdown.

Speaking on the matter on the RTÉ Radio One show with Claire Byrne, Martin also suggested the playing of the championships had the full support of the Government, even in the face of the still rising numbers of Covid-19 cases, on top of last Tuesday’s decision to prohibit any spectators from attending games.

“We want the championship to go ahead,” he said. “I want an All-Ireland this year because I think it would be a symbol that the country is fighting this virus. That it’s not going to surrender to it and I’d love to see the championship completed. Like all games, League Of Ireland, the whole lot, rugby.

“There’s another way of saying this by the way, in taking the decision we did on the crowds, we saved the championships and the leagues. It’s a challenge but to me it speaks to us as a nation if we can make sure that we can organise our sports.

“I’ve met the CMO (Chief Medical Officer Ronan Glynn), I just want to let people know, he’s as passionate a sports person as the rest of you out there. He wants to keep things going, he thinks it’s important for the health of the young people in the country that they’re out there training and they’re out there playing games.”

Last week, the GAA also put in a request to speak with Glynn and especially around the rationale behind NPHET’s recommendation. Martin further explained: “My sons are playing Gaelic football, I’d love to go see a match. That caused real anger across the country. I know it (GAA) doesn’t (get it), my own club-mates don’t get it, every sports person across the country doesn’t get it.

“I think we got that information from Ronan Glynn. Sometimes when we say we need more information, we just don’t like the decision. I take the point, we were being told by public health if you’re outdoors it’s better than being indoors, I get that point and I understand why people are correctly asking us questions.

“Ronan Glynn made it very clear to me that he felt the going to the match and the leaving of a match, people coming from different households, people congregating, mixing is the problem. So what the overall attempt was, let’s reduce the numbers of people gathering in large numbers everywhere. He will meet with sporting organisations, he has agreed to meet with the GAA for example in relation to this because he’s passionate.”

While Horan also acknowledged the situation around counties perhaps going into lockdown, he also told RTÉ radio that the appetite for a 2020 championship remains undiminished.

“We will have to engage the GPA (Gaelic Players Association) as well in the whole area of the comfort of our inter-county players of actually getting involved in the championship. There are complexities but we are of the view that we should drive on and do it. The nation will need live sport on the television at the weekends when we go through the long evenings in the winter. If we as a national organisation can deliver that moral lift to the country, we won’t be found wanting.”