McKenna Cup: Donegal ease past Down to set up Cavan clash 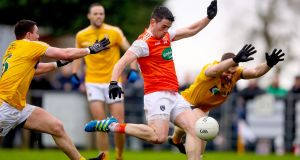 Armagh’s Jack Grugan tries to get a shot away during his side’s win over Antrim. Photograph: Tommy Dickson/Inpho

Donegal ran out easy 1-17 to 0-10 winners against Down in Newry but the win came at a cost, with Eoin McHugh suffering a hamstring injury which looks set to rule him out of the opening round of the National League.

Declan Bonner’s men were 0-9 to 0-3 to the good at half-time, by which stage Down had had a ‘goal’ from sub Conor McGrady ruled out under the new trial rules as ref Martin Cassidy ruled there had been too many handpasses in the build-up.

Martin McElhinney finished with 0-4, with Caolán McGonagle bagging the goal with 10 minutes to go.

They will meet Cavan - who blew Queens University aside in Ballyconnell - on Wednesday night, with the winners certain to advance to the semis. The Breffnimen held the students scoreless in the second half as they ran out 0-17 to 0-3 victors, with nine players getting on the scoresheet and debutant wing-back Conor Rehill picking up the man of the match award.

Elsewhere Tyrone, starting with only three of those who featured in last year’s All-Ireland final, defeated University of Ulster by 2-14 to 1-9 before a crowd of 1,900 in Omagh.

Tyrone were 0-8 to 0-5 ahead at the break but their own Lee Brennan was keeping the visitors in the contest, and his fourth point made it a one-point game early in the second half.

However, the introduction of the likes of Rory Brennan, Cathal McShane, Niall Sludden and Peter Harte steadied the ship and goals from Harte (who grabbed 1-2) and Declan McClure saw them ease over the finish line. Man of the match was Conan Grugan.

Meanwhile, Monaghan were held to a draw in Clones by St Mary’s University, who landed three injury time points to grab a share of the spoils.

Spurred on by man of the match Shane McGuigan (0-5, 4f), the students were level by half-time at 0-8 each but when Monaghan’s Barry McGinn - who finished with an eyecatching 1-7 (3f) - goaled with 20 minutes to go, the Farney were four up and looking comfortable.

Armagh were always in control against Antrim in Glenavy, Belfast, winning by 2-21 to 1-10, with man of the match Stefan Campbell accounting for 0-8 (3f).

Paddy McBride opened the scoring for the Saffrons after 30 seconds but that was as good as it got as Armagh quickly took charge and once they hit the front with two Ryan McShane points, they were never headed.

By the 12th minute, the game was over as a contest when McShane scored a goal and then Jamie Clarke converted a penalty to put nine between them, a lead that was stretched to 2-12 to 0-2 at half-time. Antrim recorded their goal in the fifth minute of second-half injury time from Eoghan McCabe.

In the other tie at Brewster Park, Steelstown schoolboy Ben McCarron was the hero for Derry as he came off the bench after four minutes to bag 3-1 in their 3-9 to 2-8 win over Fermanagh.

The Oak Leafers sped into a 1-5 to 0-1 advantage and although Ryan Lyons pulled a goal back for the hosts before the break, Damien McErlean’s side were never threatened.