McCarthy open to playing away from Croke Park in Leinster championship 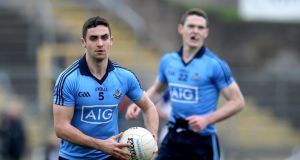 Dublin footballer James McCarthy has a therapeutic use exemption for a Ventolin inhaler.

James McCarthy answers the first question of the day with that look of complete inevitability – and no, it’s not about drug testing in the GAA.

Because, with the 2015 Leinster football championship coming out of the traps this weekend, the question of whether Dublin should play all their games in Croke Park is thrown at McCarthy as a matter of course.

Dublin await the winners of Saturday’s showdown between Offaly and Longford in Tullamore and no matter who actually wins that, they’re off to Dublin’s den of Croke Park, two weeks later.

“We’d love to go down and play a game somewhere in the first round,” says McCarthy, and in that regard the Dublin defender is hardly alone. “You would imagine it would be some day out, with 20,000 or 30,000 Dublin supporters. But look, we’re told where we have to play. They might change it someday. But we’ll see. What can you do?”

Dublin are seeking a 10th Leinster football title in 11 years and McCarthy admits it’s impossible to avoid the sense favouritism that now rides on their shoulders: “It comes with the territory. But you’ve just got to put yourself in a bit of a bubble and take every game as it comes.

“You certainly try hard not to get ahead of yourself in training. You push each other on. Nail each other, if you like. We just said, ‘Look, we’ll take each competition as it comes.’ The league is important but we’re very much focused on Leinster now and then there’ll be the All-Ireland series, all going well.”

“I actually have pretty bad asthma,” he explains, “so I take it (Ventolin) when I’m wheezy, just when I need it. But we’d have a fair idea (of what you can and cannot take) and if you had any doubts, you’d go to the doctor.

“It could be an issue for younger players. They should definitely get a crash course or something like that to make sure. The way it is going there might be a bit more pressure on fellas to break through and they might try it (something illicit) but I don’t see it as a problem really.”

Dessie Farrell, chief executive of the Gaelic Players’ Association (GPA) – who are currently assisting the fringe Monaghan footballer who has recently returned a positive drugs test – also admits one of the fears around testing in the GAA is that younger, less well advised players may end up taking a banned substance without realising the implications.

“There is a real live and important issue of keeping our sport free of drugs,” says Farrell, “and that is important in all sports, that we have a level playing field for everybody involved and that everyone involved upholds those particular values.

“But the other is specifically related to the player in terms of how it can impact on him and I think that sometimes that is lost in the information and discourse around it. There is a real health and safety issue here for players and then there is the whole reputational damage that can impact on the players as well.

“Now, I would be comfortable in saying that for the vast, vast majority of players, it does not enter their consciousness. Would that mean that there would not be one or two players who are out there that would be tempted? Of course.

“So I think one of the big issues for us to deal with is that young, vulnerable player. It is different if you are 28 or 29 and you are a part of elite sport in the GAA.

“They would encounter the drug-testing regime where testers are present and this is new (for them), and I think there are definite concerns around young players. They are particularly vulnerable in this and this is something we need to review.”

Farrell also believes the majority of GAA players have no problem with drug testing in their sport – although the way the recent positive test was leaked though certain media outlets was hardly reassuring for anyone involved.

“That is disappointing and I think unhelpful. One of our primary concerns in all of this is the well-being of the player and his capacity to deal with what is a pretty traumatic event in its own right.

“The media attention doesn’t help and the fact it was leaked before due process was complete is unhelpful.”

McCarthy and Farrell were speaking at the launch of Cúl Heroes, the new official player trading cards of the GAA/GPA.

For the first year, it will include 468 footballers and hurlers and a collection book.