Limerick statistician a man with the inside track on Cork 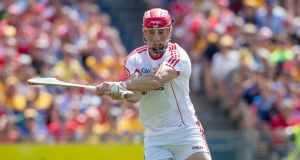 Anthony Nash: The Cork goalkeeper’s puck-outs will be pivotal to his county’s hopes against Limerick on Sunday. Photograph: Morgan Treacy/Inpho

If possession is nine-tenths of the law, then hurling goalkeepers play a pivotal role in trying to ensure their team-mates have both quality and quantity when it comes to puck-outs to a point where team statisticians focus on that particular aspect of the game.

It’s real time analysis, the information available to a manager and his selectors throughout a game and therefore communicable to the players too.

Speaking in his role as a brand ambassador for Paddy Power, Diarmuid O’Sullivan, the former Cork All Star hurler and footballer who was part of Kieran Kingston’s Cork hurling management team that stepped down in 2017, offered an interesting insight into the level of detail.

He also outlined how a Cork man, Kildorrey native Seán O’Donnell, is now firmly ensconced in the Limerick camp ahead of Sunday’s All-Ireland hurling semi-final between the counties at Croke Park.

He was a statistician for the Cork hurling team for several years but, when he decided to step aside in 2017, Limerick manager John Kiely persuaded him to switch allegiance.

O’Sullivan explained: “John Kiely is a clever man, very shrewd and he operates a good ship. I suppose, one the key factors for Limerick this year is Cork’s statistician and puck-out strategist for the last three years [O’Donnell] is now with Limerick so that’s a major feather in their cap.

“He’s a fair idea of what Cork’s puck-out strategy has been and he’ll know different types of set-ups so I presume Cork have been working away trying to change different patterns for their puck-outs over the last number of weeks, just to throw Seán off the scent because he’s excellent at his job.

“I don’t think you could find a better guy in the game of hurling to provide you with the kind of detailed information he can provide you with, and real time information at that, so Seán will be alive and Anthony [Nash, Cork goalkeeper] will know that.

“Anthony is the type of guy, he won’t like someone to get the better of him, so he’ll be working diligently to get this thing right. It’s not just down to him; there are another 14 guys outside him. If you turn your arse to him, it’s saying, ‘I don’t really want the ball’. You have to be brave enough and get yourself in position where you can get it.

“It’s not just Anthony, there’s an onus on every guy on the field to put himself in a position where he can receive the ball and if a guy comes free as we’ve seen, Anthony will give him the ball. The opposition have tried to cut it down, Clare were very good on it for periods of the game, Limerick were very good for periods of the game in Cork but they just seem to break down.

“They don’t seem to be able to keep going through the 70 minutes and if you can’t keep your structure to defend Anthony Nash’s puck-outs for the 70 minutes, at some stage it will hurt you. During the second half of the Munster final that’s where Cork really shone through, when Anthony was getting possession, he was getting the lads in possession of the ball and they were able to play from there.”

O’Sullivan confirmed that all the top inter-county teams have statisticians, whose role would include devising puck-out strategies and providing real time feedback from the stands to the sideline.

“Your goalkeeper is getting the ball on average 50 times in his hand, that’s 50 opportunities for you to gain possession first time and if you can gain first-hand possession you’re in control of the game. If you’re struggling to win primary possession, obviously you’re on the back foot so puck-outs are key.

“If lads are wired up, you can get real-time information as to who is struggling under puck-outs, who’s winning most puck-outs, where are you strongest. You can transfer that info straight down to Nasher. ‘Anthony look we’re getting a little bit of success here maybe try one or two more’ if it’s working or if it’s not, ‘you have to change it up’.”

The statisticians provide a multitude of information right across the game at half-time. The key, as O’Sullivan agreed, is separating the wheat from the chaff.

“Sometimes you can get bogged down in stats, they are a guideline, but sometimes you just have to trust your instinct.”

So at Croke Park on Sunday, it will be fascinating to watch Nash and O’Donnell, one time collaborators, pit their wits against one another.