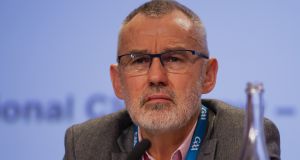 Incoming GAA president Larry McCarthy, the first overseas member to hold the office, made use of his background when addressing his first conference (remotely) on Saturday. Involved with the New York board for decades, the professor of sports management cautioned delegates with lessons from January’s assault on the US Capitol.

“One of the lessons that we might learn from the recent near collapse of democracy in the United States is that words matter.

“What one says matters, what one puts in the public domain matters. In that regard I would ask all of us to tone down the tenor of our public commentary. Social media has wonderful aspects to it, but there is also a dark side.

“One of which is, in the words of sports commentator Bob Costas, ‘a corrosive assault on civility’. Let’s think about that, “a corrosive assault on civility”. By all means let us express an opinion, but please let’s do it in a manner that is respectful. There is no place for the type of abuse that many of our players, volunteers and officials have been subjected to in recent years.

“By all means argue the point in a public discussion, but do so in a manner which does justice not only to yourself but to the GAA. If you are one of those keyboard warriors who, in cowardly fashion hides behind nom de plume’s and aliases, and castigates our officials, players or referees, stop.

In his call for more courteous use of public utterances, he broadened the pint to include pundits.

“It is a term that I loosely use to describe our members who have transitioned from the playing field to the role of commentator or prognosticator on the national airwaves. Their comments, sometimes well meaning, can have a huge negative impact on our players, referees, and officials.

“Nobody sets out to have a poor game, least of all the players, but it happens, and it happens on the big stage as often as not. Rest assured that the players and officials are the first people to know that they have not performed to their potential and added critique can have a distinctly negative impact not only on the player, referee or official, but on their extended families as well.

“This was a point made by a prominent member of the Collective a number of years ago. On a national TV show he said that he wished people would realise that he was taking part in an amateur sport, and while he was trying his best, there were days when things did not go well. Today’s players, referees and officials are no different. Measured criticism of a performance is fine, but please, let us all realise the impact of our words.”

Acknowledging that as a result of the current pandemic, “the cupboard is bare,” he went on to detail the difficulties facing the organisation whose reins he now picks up. One request he did make of the Government was that children be allowed to return to play.

“We are in unprecedented circumstances at the moment. We are not in control of our own sporting destiny. We are a sport organisation without sport - except for our games going on in Australia. We are not deciding on matches and fixtures, nor coaching and games, nor tournaments.

“We are operating at the behest of the Government and the public health authorities, and we will continue to do so.

“I would respectfully ask the authorities that we be allowed to have activity for children in our clubs once schools have safely opened. We showed last year that we can do this very safely and very effectively. Acknowledging that the circumstances are more onerous now, there is no doubt in my mind that we can do so again.”