It was 50 years ago... remembering the first-ever GAA All Star awards 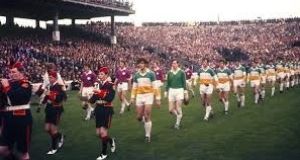 The 50th All Stars teams are announced this weekend. The scheme, devised by journalists and sponsored by tobacco firm PJ Carroll and Company, was the first high-profile commercial partnership entered into by the GAA, back at the dawn of the acceptance of sponsorship.

“The idea of these All Star awards came from the journalists and won the immediate imprimatur of the Central Council,” said then association president Pat Fanning, at the launch of the scheme in August 1971.

“It is indicative of the journalists’ commitment to the GAA that they should undertake the organisation and the preparation of the entire operation. They have found willing allies in PJ Carroll and Company through whose generous sponsorship a fine idea becomes a reality.”

One of those founding journalists, Jim O’Sullivan, who retired as GAA correspondent for the Irish Examiner in 2009 but who has remained the primary archive source on the All Stars for everyone, remembers the impact of the scheme, which was lavishly funded, for example commissioning the trophies from one of Ireland’s leading sculptors, Gary Trimble.

“One thing I noticed at the time was that it boosted the social standing of the GAA to have a major function in a big hotel, compete with black tie. Back then it was the sort of thing that only other sports like rugby would have been associated with.”

The system of selection was different at the start. An expanded panel of journalists – including two from this newspaper, Peter Byrne and Edmund van Esbeck (who later became soccer and rugby correspondents, respectively), as well as Gaelic Games correspondent the late Paddy Downey, who was one of the senior selectors – ultimately picked the team.

There was no formal limit on nominations, as there is today. “I remember that first year when Mick Birmingham, the Dublin hurler, won the All Star at right corner forward, there were eight nominations,” recalls O’Sullivan.

The early functions were in Jury’s Hotel in Ballsbridge but then moved not too far to the Burlington where they remained for many years. The sponsors, however, got the ball rolling earlier in the day by hosting in their headquarters by the canal what became legendary lunches with free-flowing “hospitality”.

“I brought a friend to one of these lunches as my guest,” says O’Sullivan, “but by the time he got to the hotel he needed to lie down and ended up missing the banquet.”

Another major attraction of the All Stars was the tour to the US, which was part of the prize for the winners.

“The majority of players on All Stars tours were going to America for the first time. I know the first time I ever visited there was with the All Stars,” he says.

It wasn’t all plain sailing either, and it didn’t need social media to leak information or point fingers. O’Sullivan remembers Frank Murphy, the formidable and now-retired Cork county secretary, berating him for voting against one of the county’s players at a selection meeting, however he had got wind of it.

“It could be very awkward,” he says. “Michael O’Hehir got caught as well when someone got wind of who he’d voted for at a meeting and had a cut at him in public.”

An old ritual that is likely to be re-enacted over the coming days.