Fenton flies the flag with new summit on the horizon 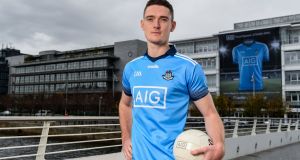 Just a few hours before the first shots are fired in the 2019 championship with the provincial draws in RTÉ, a number of Dublin players came to the head office of county sponsors AIG to help to launch the new jersey on Thursday morning.

It’s big business. Dublin-branded gear, jerseys, training tops etc, according to an industry source “can shift around 100,000 units” and new designs can add to that, especially around the Christmas period.

The county’s population makes it a brand leader in GAA and among the biggest-selling replica jerseys in the market. Next year will see a Rugby World Cup with big consequent demand for the Ireland jersey whereas qualification for an international tournament sends the soccer equivalent’s sales ‘through the roof’.

It’s therefore a coincidence that Dublin footballer Brian Fenton found himself watching United jerseys last weekend on a trip to Old Trafford, as part of the recreational possibilities that arise in the inter-county off-season.

With the pressure off to a point – club activity involves trying to stave off relegation with Raheny along with clubmate and Young Footballer of the Year nominee Brian Howard – he has been able to indulge his other sporting interests, between Old Trafford and keeping up with Leinster rugby.

It’s been another fine year for the centrefielder (although not his best, he maintains) and has extended the remarkable unbeaten championship career to four seasons since his rookie year in 2015. For the second time he is a nominee for Footballer of the Year and odds-on for a third All Star.

A qualified physiotherapist, he works as a specialist surgery sales executive for medical devises and equipment company, Tekno Surgical, but says he may return to practice at the end of his career.

The present focus is however predictably different. The championship may be over little more than a month but already the prospect of Dublin going where no county has gone before and winning a fifth successive senior All-Ireland is up for discussion.

Unsurprisingly, he says that Jim Gavin and his selectors tend to steer clear of such talk.

“And I can’t imagine next year being any different – I think it’s going to be National Football League, one and from there on.”

While acknowledging that five changes are a lot to process at once and believing that players should be consulted at some point, Fenton is keeping an open mind on the recently floated football rule experiments, including restrictions on the hand pass, the creation of an attacking mark and limiting the number of players facing a kick-out.

“I’ve read about them and, look, anything that makes the game more of a spectacle for the spectator, a better watch, anything to promote the skills – high catching, more scores, the whole lot – I’m all for it.

“I know the lads around me are as well. I can’t speak on behalf of everyone but we all practice the skills of the game and thankfully, with Dublin, every session is goal-scoring, point-kicking, high catching, kick-passing – all those basics.

Whereas he doesn’t feel that the inter-county game has changed enormously during his career he sees variations at lower levels of football.

“I think it is changing on the club scene a little bit. You see club teams set up defensively, you see under-age teams, 13s and 14s, playing with sweepers and stuff. And it is not the best thing to see.”

Neither does he see the ideas as directed at Dublin’s dominance in the game.

“No, I wouldn’t think of it like that. It’s well publicised that attendances were lower last year and viewership was lower. So, I think it’s not just us having won the last few years; I think it’s a broader picture. So, I wouldn’t (see it) as a dig at Dublin or anything, certainly not.”

1 My favourite sporting moment: Roscommon minors restore pride to a county
2 Stephen Kenny: ‘I want people to come and look forward to watching this team’
3 No Masters, so Tiger Woods battles son Charlie for green jacket
4 Germany well ahead of the curve as Bundesliga gears up for return to action
5 Cheltenham cited Boris Johnson’s Twickenham trip as a reason for Festival green light
Real news has value SUBSCRIBE