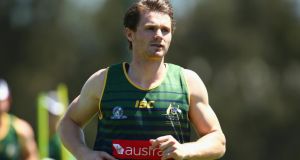 Given its hybrid dynamic, success in the International Rules series has always been dictated by an ability to adapt, something former Essendon and now Longford footballer Michael Quinn has no shortage of insight on.

Quinn is noted as holding the record for the quickest conversion of a former GAA player to play in the AFL, taking the record from Martin Clarke having made his AFL debut just weeks after arriving in Australia back in 2009.

Over three years he made eight senior AFL appearances, six of which came in his first season before he was hampered by a string of niggling injury setbacks.

In those years the 24-year-old played with and against a number of the players selected in what he considers a very impressive AFL squad for Saturday morning’s test.

The Longford centre back, somehow overlooked for this year’s Irish squad himself despite his impressive AFL bio, feels that the new kick-out rule introduced this year, which forces goalkeepers to kick long, will have a major bearing on the game.

“I think this whole kick-out thing is really going to influence Ireland,” explains Quinn. “We have two good keepers but I just think Ireland could be in for a rude awakening because they’re going to be hit hard, like in a fair kind of way because there’s going to be a lot more contested balls.

“Ireland are going to be outplayed in that regard because that’s what Aussie Rules is, it’s contested one or one on two challenges and with those kick-outs going the way they are it mightn’t suit as many Irish guys, that’s only one aspect of the game but a fairly important one.

“It’s a skill in itself and it’s kind of overlooked in Gaelic football because it’s so quick and it mightn’t be as common as in AFL, those bouncing balls on the ground between two guys and it’s about what way to move your body to get in and get the ball. I just think that the middle third is going to be huge in this game.”

Quinn has reservations not only on how Ireland will cope with the kick-out, but rather how the new rule will affect the game as a spectacle. He fears a situation in which the entire Australian forward line retreat to the middle of the field in the confidence that Ireland cannot kick short.

“I don’t understand how that rule is going to unfold, if they have to go long can all the opposition not just retreat back a certain distance and all automatically sit back and bunch it, I think that rule might ruin it.”

Who to watch out for

Off-the-back of last year’s embarrassing defeat the Australians have selected a strong team who Quinn insists will be determined to put things right.

“I think they were short on enforcers or leaders last year but this year’s team would nearly train themselves. Like they nearly have a captain or leader from nearly every team or group. Like from Hawthorn Luke Hodge and Grant Birchall would’ve both been captains there when they won it; Jobe Watson is captain of Essendon; Joel Selwood was captain of Geelong.

“Then they have the likes of Stevie Johnson from Geelong too. He’s very dangerous, he’d be the equivalent of probably Bernard Brogan out there. Patrick Dangerfield is very good too he’ll be one to watch out for, he’ll probably be a half forward. They play in four midfielders in the AFL so he’d be one of them; very fit, would run all day and get his hands on a lot of ball, he’s that sort of player.

“The two Hawthorn lads included would be gun players they’ve been around the block a long time now and they’d be very very good.”

Two other players set to feature, controversially, for Australia are the Essendon duo of Dustin Fletcher and Jobe Watson both of which have been selected despite being under investigation for doping offences.

The club itself has been under investigation since February 2013 by the Australian Sports Anti-Doping Authority over the legality of its supplements program during the 2012 AFL season and the preceding pre-season.

“This all happened when I left in 2011, a new high performance coach came in, a whole new staff came in and it was a whole new unit.”

The DCU student insists there were no hints of any substance abuse during his time at the club, although he did explain that it was not as easy as expected for players to know exactly what they’re putting in their body at all times, but there was no reason to suggest those around him in the club were not doing “the right thing”.

“Dustin Fletcher is 39, and he’s going again next year, that’s a story in itself, he’s just a gem and to be still playing at that age it’s just crazy. As a goalkeeper for Australia he’s crucial and they always do well when he’s playing, while Jobe Watson is the captain of the club.

“I don’t know the ins and outs of it all but it’s dragged on now for nearly two years and it’s still in court so for the players it’s tough. It’s their careers that are on the line and I know personally that there are lads who have moved on from the club or been released or de-listed and other clubs aren’t really interested in picking them up as if they get an infringement notice that suspends them for X amount of time so they’re no good to a new club. That’s very hard to take for players, it’s their lives like.”