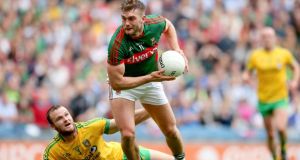 There was a poignant moment at the end of the Mayo-Donegal game on Saturday. I was looking down at the teams coming off the field and Mayo were being clapped off by their supporters. While this was happening every single Donegal supporter in the stadium that I could see stopped and did the same for their team.

For me it was a bit of a moment, almost as if they were paying their respects to the team that had given them so much over the past number of years. I don’t know what plans players have for the future, but it was a touching gesture by the supporters.

There had been a lot of talk beforehand about what both teams would do. My own view was that to win Donegal, who came into Saturday’s match with an average of 10.75 points, needed to get goals and the best way to do that against a team like Mayo was to push on – two up and three up – and try to force the issue with long balls, diagonal balls.

The dilemma for Donegal was when they have pushed players up the field at various stages during this championship they have looked a bit porous at the back. Teams seemed to get through a wee bit easier.

Against Mayo you have to deal with the likes of Keith Higgins coming from the full-back line, Colm Boyle and Lee Keegan from the half-backs, very mobile and direct midfielders, Diarmuid O’Connor on the wing – players in other words who can make those incisions.

From the Mayo perspective there had been talk of a tactical shift in terms of the playing style and maybe going with a sweeper system. In the end they decided to go with it and despite any rumblings in the county, it was in my opinion a decision they had to take.

I think if they hadn’t gone with it and lost there would have been far greater potential for outcry in the county. You have to give the Mayo management great credit for making that tactical adjustment based on the threat of the Donegal full-forward line.

They set out to address the goal threat and in the end Donegal scored just 11 points – their season’s average, but with no goals. It was smart thinking.

There was also a lot of comment about Donegal being on the road for a long time, but it must be remembered that Mayo won their first provincial championship on the same day we did in 2011 and they’ve won five in a row, so they’re on the road a while as well.

The big positive for Mayo is that their average age is a lot younger than ours was.

Another talking point was that they hadn’t been tested in Connacht. I never saw the foundation for that concern. Consistently Mayo have come into Croke Park for quarter-final stages and put in big performances, so I didn’t see that being a problem.

It’s a powerful trait. I know they haven’t won the All-Ireland yet, but I would consider them to be very mentally tough. They don’t get knocked off course easily and don’t get too down if they concede or too high when they score. They’ve good mental balance and great belief in themselves.

The other important thing is that they have some very good players. I don’t know if there’s a better corner-back in the country at the minute than Keith Higgins.

In my opinion Lee Keegan is the best half-back in the country and they have fantastic options around the middle of the park – mobility in Tom Parsons and Séamus O’Shea, height and physicality in Barry Moran and Aidan O’Shea all around there if needed. That’s huge flexibility to make changes and a lot of options in the middle of the park. I also think they’ve added something extra.

I know maybe Aidan O’Shea doesn’t have the finesse of a Colm Cooper or Michael Murphy or Bernard Brogan, but he has the ability to make the same level of contribution, which I think is very, very significant for them and has been very beneficial for Cillian O’Connor in terms of taking the pressure off.

O’Shea has such presence. It seemed to me like the whole focus was on how Donegal were going to stop him at full forward and that all eyes were on him and who was marking him and who was sweeping him, and I believe that freed up other players.

Even at that he won a ball that most other players wouldn’t have been able to win and took two players on, went over the top of one of them and stuck the ball in the net, which will no doubt intensify focus on him for the remainder of the season.

It was a touch of individual class, but I thought Eamon McGee would have been a better fit for marking a player of that physique than his brother Neil.

Eamon is six foot three and Neil is six foot and if Eamon wasn’t going to be marking O’Shea, I’d have put someone else on Cillian O’Connor and had Eamon sweeping. If you think about the Mayo game plan that’s what they did on Michael Murphy. They man marked him, but had Barry Moran sweeping.

That goal at the weekend really rubber- stamped the effectiveness of the O’Shea switch and emphasised that there is a difference between this Mayo team and previous teams.

You can also see that in the contributions of Diarmuid O’Connor and Tom Parsons, who now have significant roles in the team. Both have the same sort of build, six foot one, six foot two, and strong. They cover a lot of ground and are skilful on the ball and good foot passers, which would suggest that the management has this type of player at the heart of their football philosophy.

You can see what the Mayo management are doing bringing in those players, and one or two players can make a huge difference. I’m particularly impressed by Diarmuid O’Connor, who I think as the competition progresses and because of the sort of teams they’ll be coming up against will get even more space to express himself.

His size, physique, ability to get down the pitch and skill levels have made him a big addition to the team this year.

So they’ve now a real point to their attack in terms of an out ball or diagonal ball, but it also complements Cillian O’Connor and their running game because they do have a significant running game with players coming from deep.

I thought Donegal looked tired. Even early on they seemed to be holding on to Mayo’s shirt tails a bit. Even though the game was tight you got the sense that the pace and acceleration of Mayo was threatening all the time.

Psychologically when you get defeated in a provincial final it is devastating. There are dreams and aspirations going into a final, particularly in Ulster.

They are 100 per cent there and then you’re beaten and things are thrown into chaos and you’ve to get ready for the back door, which is not what you’ve planned for on any level. We saw the impact of this on Cork a couple of weeks ago.

One negative was that in the second half they could have been a lot more ruthless. They could have finished the game earlier if they’d been more clinical with the possession they had the chances created. Crucially, as I’ve already said, they now have a point to their attack and in my view are better placed than ever to win the ultimate prize. On a personal level I’d hope that they could fulfil that dream.

Can they, though, is a different question and one I look forward to addressing in a couple of weeks.