Déise set sights on Kilkenny after after cracking performance in Thurles 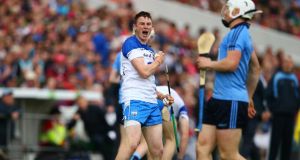 Don’t look now. The Déise are coming with increasingly convincing arguments that this may be the group to bridge the chasm back to 1959. Maybe not this year, perhaps and they will have to fly at a higher altitude now in the All-Ireland semi-final when they meet the black and amber crowd. But their season keeps roaring and although stubbornness kept Dublin in this quarter-final, Derek McGrath’s team dominated in the second half.

They re-emerged after a surprisingly open first half and tore into the sky blue shirts with the intensity and conviction that has been their calling card. A 1-4 return during an eight-minute blitz of pressure and invention put them in control.

The goal was pure Waterford; all-out pressure forcing a mistake as Dublin sought to clear and Maurice Shanahan, in the thick of another workaholic outing, had the composure to look up just long enough to see Shane Bennett all alone. The Ballysaggart man’s drop-shot was unstoppable.

For 10 minutes after that, Waterford’s work rate was ferocious as they pulled away from Ger Cunningham’s team. A hook on Peter Kelly and brilliant endeavour by Bennett to win a sideline ball were celebrated as emphatically as points. As it turned out, Bennett scuffed that sideline but it fell kindly to Austin Gleeson, who immediately shot an outrageous point over the shoulder.

Gleeson is becoming the latest charismatic hurlers in the long roll call of folk heroes from Mount Sion. He stroked a beauty of a sideline cut in the 58th minute to settle Waterford’s nerves after Mark Schutte revived Dublin with a well-struck 53rd minute goal on one of the rare instance when they got quality ball inside.

That score was a test of Waterford’s reserve of belief and although they rushed a few clearances thereafter and looked a little bit disorientated under the high ball, they never lost sight of what they were about.

The goal which killed the game off was a cruel counter-strike: Waterford lapsing back, inviting siege and then firing long. A slick touch by Bennett to Patrick Curran played Shanahan through: the Lismore man has the same cold eye for goal as the older brother. 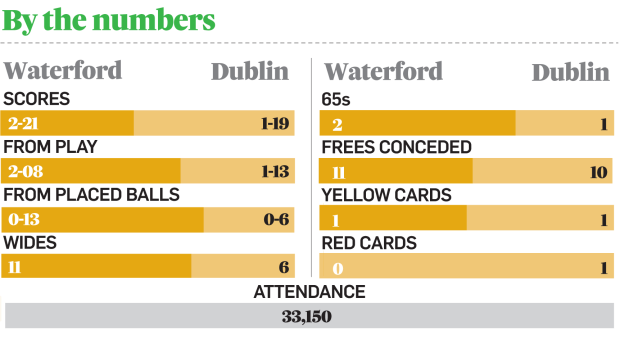 It was a disappointing exit after a disappointing season for Dublin. The first half demonstrated McGrath’s tactical versatility. Tadhg de Burca, so influential as a covering defender during Waterford’s Munster campaign, was tasked with shadowing the combative Ryan O’Dwyer here and although the Kilmacud man clipped two good points from play, de Burca’s importance to the Waterford defence did not dim, with a high, clean catch on the edge of his square one of the highlights of the half.

With Dublin matching man for man, Kevin Moran dropped deep into his half, bringing his marker, Shane Barrett, along for the spin. Colin Dunford was posted in front of the Dublin posts, with Shanahan roving about as the chief target man. Waterford’s plan did not deviate: busy defence and a swift delivery out to Philip Mahony or Gleeson for the angled delivery down.

It led to the three quick points for McGrath’s team. On two occasions, the speed and direct running of Dunford and Bennett threatened to expose Dublin but Paul Schutte positional play was bang on all day. Elsewhere, Michael Walsh stayed out on the right wing for Waterford and looked like he was longing for a more central involvement.

But there was a sharpness about Dublin’s play that had been lacking in their previous win against Limerick. They were alive to Waterford’s attempt to drag their defenders wide and then hit the runner down the middle; Austin Gleeson’s sweeping point in the 14th minute was the only success Waterford had down the middle channel.

Dublin’s attacking play was smart in the first 35 minutes. Two good deliveries to David O’Callaghan were rewarded with no-fuss points by the Ballyboden man and the Waterford sideline showed no sentiment in replacing Noel Connors on the half hour mark.

A fly read on Stephen O’Keeffe’s puck out to Philip Mahony signalled that Danny Sutcliffe was beginning to bubble with invention again and he bobbed and wove into pockets of space to deliver three points from play, the sort of tally that signals alarm bells in Waterford’s parsimonious defence.

Paul Ryan and Shanahan punished any untidy defending with frees and Shanahan posed problems every time he grabbed the ball from the sky despite the attentions of Cian O’Callaghan. But the Dubs looked comfortable and were unfortunate to have a 65 given even though Gary Maguire kept the ball in play and suffered rough justice when Liam Rushe was called for over carrying under fierce Waterford attention.

The game ended with Rushe carded for a rashly striking out with the hurl and the reaction of the Waterford players illuminated the fire within them just now. They are prone to a rush of blood to the head in their shot selection and Dunford has yet to fully exploit his lacerating speed. But they are a team deep in honesty and self-belief and have in Moran and Walsh two front-line players who get through a monstrous amount of quiet, vital work.

The space that the Dublin half forwards enjoyed in the opening period just vanished; any shot they got off was under pressure. De Burca managed to both shadow O’Dwyer and sweep across the line in the second half as they invaded not just the personal space of the Dublin players but their minds as well.

The best thing about them is Waterford is that they are fearless. Kilkenny are, of course, a frightening prospect for a young team and will be heavy favourites but as Waterford trooped off– happy rather than delighted – their supporters must have felt that this test is coming at the right time. On they roar to Croke Park, growing bolder and more confident by the day.