Hurling promotion and relegation issues to be settled 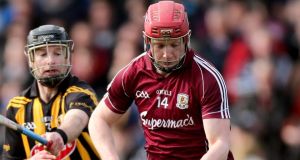 TOD AY
Allianz Football League
Division Four
London v Carlow , Ruislip, 2.0 – This will effectively decide who finishes bottom of the table and London’s injury list must give the visitors a slight edge.

Having lost the Leinster final to their CBS neighbours, Kieran’s responded with a late comeback against St Brigid’s, Loughrea, to win in extra-time, in the quarter-finals. Driven by star Limerick minor Ronan Lynch, Árdscoil won the Harty easily and have the depth to avenge their recent meetings.
Kilkenny CBS (Kilkenny) v Scoil na Trinóide Naofa, Doon (Limerick), Temple more 1.45 – The CBS have lost the last two finals and are on something of a mission. Their Leinster final defeat of St Kieran’s was notable for their smart containment of the opposing attack and the finishing of Jamie Byrne, whose two goals kept the favourites at arm’s length.

Doon were impressive winners over Presentation Athenry in the quarter-final, effectively having to win it twice after the Galway side got back into the match in the second half. The Kilkenny side, however, look to have too much.

TOMORROW
Matches at 2.0 unless stated
Allianz Hurling League
Division One A
Kilkenny v Waterford, Nowlan Park – The devastation wrought on Waterford by Clare last week is the first significant challenge for Derek McGrath’s management. On his side are the second-half comeback that restored some pride and the fact Waterford have some experience of recovering from hidings over the years and have done so successfully.

More practically, they have Michael Walsh back after suspension and his absence left them wide open at the back in a manner reminiscent of the time he was played at full back in the 2011 Munster final and, with his ability to c over across the half-back line decommissioned, hell broke loose.

Kilkenny have been up and down, making wide ranging alterations to the team from match to match without establishing a rhythm. In keeping with the trend in the division the holders have won their home matches and lost on their travels.

Brian Cody’s team are favourites but they managed both to leak scores alarmingly against Dublin last week and shoot poorly when the match was within range. Given definite room for improvement on either side, it should still be a home win.


Tipperary v Dublin, Semple Stadium – A world of change has swept through the game since these counties met in last season’s league semi-finals. Dublin went down to a heavy defeat – mitigated by having hurled in a lower division that spring – and Tipp went along to the final. Summer turned their fortunes upside down and now they’re both trying to manoeuvre a way out of the drop zone.

Dublin have been impressive in their home matches, beating the last two All-Ireland champions but poor on their travels. Tipp have tinkered with the line-ups quite a lot so far – albeit delicate scalpel work when a meat cleaver might actually be needed – and have predictably struggled to achieve tactical coherence. Pádraic Maher played well against Galway but is out with injury and will be missed against the physical forcefulness of Dublin’s half forwards.

The Leinster champions were good against Kilkenny and make just one change, bringing in Simon Timlin for Cian O’Callaghan, but consistency is an issue given how disappointing the failure to beat 14-man Waterford was.

Dublin look the better option but on the basis that all of the criticism and despair in the county must draw a response, Tipp get a hesitant nod to put down a performance.


Clare v Galway , Cusack Park – Clare are been the only side to have successfully bucked the home trend, by winning in Thurles and are now in the quarter-finals. Some of their play has been hugely impressive and they are understandably favourites here.

Galway, however, have bobbed along towards the quarter-finals and have the morale boost of their champions Portumna bringing home another All-Ireland earlier in the week and the return of those players, most importantly captain Joe Canning. Anthony Cunningham’s team also won a challenge between the counties, played within the past few weeks. Care’s advance qualification might help to open the gate for Galway.


Division One B
Laois v Limerick, O’Moore Park – Last week’s late concession of 1-1 to Offaly and the resulting dropped point was a killer for Limerick, who despite a comfortably superior scoring difference now face another season in the lower division.

Even without that frustration, this would be a tricky assignment given the encouraging displays of Séamus Plunkett’s Laois, who are guaranteed a quarter-final place. Limerick to win and keep their fingers crossed listening to dispatches from Cork.
Cork v Wexford, Páirc Uí Rinn – For whatever reasons – post-All-Ireland depression or ennui at life in the lower division – Cork haven’t been able to raise much of a gallop to date and are mightily relieved to be within a win here of promotion.

Jimmy Barry-Murphy has a strong selection but Liam Dunne’s Wexford haven’t been far off Cork’s outcomes when the matches in this division are compared. A big incentive plus home advantage to clinch the deal for Cork.


Offaly v Antrim, O’Connor Park – A meaningless encounter in that the two counties will be playing again next week in the relegation play-offs. Offaly haven’t been as bad as results suggest and should demonstrate this over the next fortnight.


Division Two A
Carlow v Westmeath , Dr Cullen Park – Westmeath’s decline means that instead of challenging at the top they’re simply marking time. Carlow are into the divisional final and should sign off with a flourish.

London v Kerry, Ruislip – Kerry are already guaranteed to top the table and London are safe.


Kildare v Derry , Newbridge – Kildare have been relegated. It’s been an impressive league campaign by Derry and they can round it off by sealing third place.