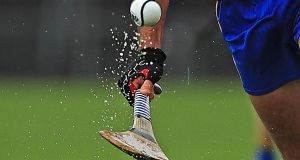 St Kieran’s College flexed their hurling muscles and kept their hope of a fourth successive Croke Cup alive when they blitzed St Brigid’s of Loughrea in a one-sided semi-final in Tullamore.

St Kieran’s were led by a stylish display from their captain Adrian Mullen. One of two survivors from last year’s victorious side (Martin Keoghan is the other), Mullen helped himself to 2-9 with a devastating performance.

St Brigid’s started like a train, using their pace to open with points from Dylan Towolawi and Damian McGlynn but St Kieran’s quickly hit back with a Mullen brace.

St Brigid’s were bright in the opening stages, with Donal Mannion leading the charge, but once Kieran’s got going they took control. In a dazzling 17-minute spell they bagged 1-9 without reply to take a firm grip on the game. Mullen was central to that, grabbing 1-5. His goal was the centrepiece of that haul, the captain gathering Ted Drea’s 18th minute hand-pass and rifling it past Brendan Lynch.

At half-time St Kieran’s were 1-13 to 0-3 in front and well in charge. St Brigid’s lifted their game in the second half, but the gap was too great to bridge. Brigid’s did raise a green flag when Towolawi blasted a 46th minute goal, but two in lightning-quick fashion from Ciaran Brennan and Mullen put the seal on an emphatic win.

McGrath, who captained Tipperary to All-Ireland minor glory last year, produced some big moments in the second half, after Andrew Ormonde had notched five first half points from play.

Templemore were the better side at O’Moore Park but they were stung by the concession of goals in stoppage time at the end of both halves.

That allowed Kilkenny CBS to remain in touch at half-time, trailing by 1-8 to 0-14, and to also ensure a nervy finish for Our Lady’s.

Joe Sheehan netted in the third minute of injury time in the first half and goalkeeper Ben Maher, who made some big saves throughout, lashed home a 20m free at the death.

But when the dust settled, Templemore’s dream of another Harty and Croke Cup double, to emulate the school’s 1978 exploits, remained very much alive.