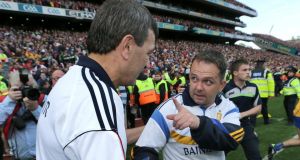 The GAA have defended the choice of Saturday evening for the All-Ireland hurling replay despite criticism by Cork.

It was announced immediately after Sunday’s draw the teams would meet again next Saturday fortnight, September 28th, and will be the first senior final to be played under floodlights.

“I’m really disappointed by the fact that it’s on a Saturday. The flagship game of the season, the All-Ireland senior hurling final, should be on a Sunday.

“It eliminates quite a lot of people from the mix who have to work on Saturday and we’re quite disappointed with that.

“Already we have had representations to Croke Park but it doesn’t appear that we will be successful. I would like to see as many people there as possible but this will exclude quite a number.”

There was no choice in the matter, given a decision had already been made that the women’s football final – coincidentally featuring Cork, against Monaghan – would not be moved as it was last year.

The previous weekend was ruled out because of the All-Ireland football final between Dublin and Mayo.

Speaking about the replay arrangements, Feargal McGill the GAA’s head of games administration said the association had to consider a number of issues.

“In respect of the date, it was agreed at the start of the year that any replay of the hurling final would be September 28th and it has been part of the fixtures calendar.

“On the throw-in we’d always consult with the gardaí in respect of the appropriate time for matches and we try to strike a balance between facilitating those travelling to the game and the need to hold it later in the day.”

The Cork-Clare match will be the second All-Ireland final to be replayed on a Saturday.

Thirteen years ago the football final between Kerry and Galway ended in a draw and was replayed on the first weekend in October.

It was scheduled for 3.30 in the afternoon but this was before Croke Park installed floodlights.

Unusually, the attendance at the replay was bigger than that at the first match – 64,094 as opposed to 63,349 – but this was in the middle of the Croke Park reconstruction project and additional seats had been added in the fortnight between the draw and replay.

The reason for staging that replay on the Saturday was because the first Test of that year’s International Rules series had been scheduled for the Sunday.

It was also a decision that didn’t attract universal approval, with then Galway PRO, the late Jack Mahon, who was centre back on Galway’s successful 1956 football team, protesting:

“There is no way an All-Ireland final should not be played on a Sunday,” he said. “The All-Ireland final is the biggest sporting event in the land and to give it secondary importance to any Australian visit for a compromise rules (sic) fixture is very wrong and demeaning to our game.”

The replay has equally created an issue for Clare, who also have a date with Antrim in next Saturday’s Under-21 hurling final, with county chair Michael McDonagh saying the county might not be able to field teams in this year’s Munster senior club hurling and football championships.

Clare’s potential march to All-Ireland under-21 and senior hurling success may come at a price as local club competitions are running considerably behind schedule. The alternative is to nominate clubs to represent the county in the provincial hurling and football competitions but that scenario isn’t ideal.

McDonagh said: “We’re having a county board meeting on Tuesday evening (tonight) to discuss the situation. We’re under pressure here in Clare and we need a bit of breathing space. We would hope that Munster would approach us, in view of the circumstances.

“With our under-21 and senior hurlers involved in the All-Ireland finals, we’re facing obvious problems with our club fixtures schedule. And we would be looking for the Munster club championship to be put back, in good faith, to give us a chance of sending teams forward to compete.

“We would have been able to complete our county championship on time if the All-Ireland senior final didn’t go to a replay and I would hope that other Munster counties would look favourably on our plight.”