O’Neill braced for meeting with his native county 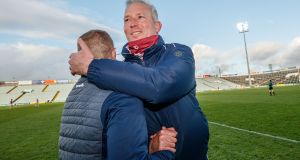 Shane O’Neill celebrates Galway’s victory over Tipperary at the Gaelic Grounds. “Galway and Limerick were two of the top teams at the start of the year and it was inevitable we were going to meet at some stage if we kept advancing.” Photograph: James Crombie/Inpho

Galway manager Shane O’Neill says it was almost inevitable that he was going to come up against his native Limerick in his first championship in charge of the Tribesmen.

But he doesn’t see it as much of a factor in Sunday’s semi-final showdown even though there are seven members of the Na Piarsaigh club that he managed to All-Ireland club glory in 2016 on the Limerick panel.

‘I sort of felt that was going to happen at some point. In fairness, Galway and Limerick were two of the top teams at the start of the year and it was inevitable we were going to meet at some stage if we kept advancing.

‘We were both tipped to be there or thereabouts at the start of the year and we are now in that situation and the boys are really looking forward to giving it a crack on Sunday.

“Obviously, I know the Limerick lads well, especially the Na Piarsaigh lads, there’s seven of them in the squad I think. I would have been in regular contact with them being in my own club but we decided we would stop after the provincial finals, that there wouldn’t be any contact for a while,” said O’Neill, who has no injury concerns heading into Sunday’s game.

Limerick manager John Kiely is a former team-mate and the pair are good friends. They have a good working relationship from when O’Neill was in charge of his native Na Piarsaigh and Kiely was cutting his teeth in charge of Limerick, with a host of players from the city club as part of his squad.

“Myself and John were on the Limerick U-21 team together, we lost the Munster final to Cork, and we were on the senior squad together for a while. I know John well, know him personally and he has done a great job there.”

O’Neill said that it won’t be strange, after all that has happened this year, facing down his own county at Croke Park on Sunday. Limerick defeated Galway by 1-19 to 0-14 in the league at the Gaelic Grounds in February and also came out on top in a September challenge match.

“The first day in the league game was a small bit strange and then we played each other in a challenge match again in September. It’s not overly strange to be playing them. It has been a strange year, now we are playing them in an empty stadium in Croke Park in an All-Ireland semi-final in November. That’s a lot stranger than the fact we are playing Limerick.

“We would know the players but that could be as much a hindrance as you might have preconceived views about some of them. I’m not sure it will make much of a difference.

“We were only getting to know our lads at that stage when we met in the league but one thing we learned was that we have a huge amount of work to do to catch up to the likes of Limerick. We will know on Sunday if we have managed to do that. They were very slick that day and pulled away in the second-half. But I’d like to think we have improved a lot from that day as well,” he added.