Using materials used for repairing boats, the hurl maker’s camán is stronger and he believes it has a better “sweet spot”

Using materials used for repairing boats, Martin Dunne's camán is stronger and he believes it has a better “sweet spot”. Video: Darragh Bambrick 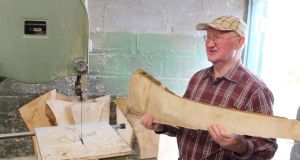 Martin Dunne: “Any hurler who has used it tells me the fibre glass coating also improves the sweet spot, which is what every player looks for when striking a hurl”.

He says it can strike the ball faster and higher, is definitely a lot stronger, and has a more profound “sweet spot” that can only improve accuracy. And, with hurlers now forced to take penalties and 20-metre frees from on the line, and not beyond it, there may be another timely advantage.

So has Martin Dunne just developed the perfect hurl?

Dunne certainly thinks so, who after 30 years of making and repairing hurls at his small workshop in Drumcondra, has begun adapting the traditional building method in a simple and almost inconspicuous way – using strips of fibreglass and a bonding resin more typically used in boat repair.

Even in this modern era of the game, the skill and pace of hurling evolving faster now than ever before, the one thing that has been slow to change is the hurl itself, although for mostly natural reasons: nothing beats ash as the source of material, and almost everything else about the hurl is effectively limited by the demands of the game, including size.

What Dunne has begun doing – and he doesn’t claim sole credit for the idea – is to wrap a couple of thin layers of fibre glass coating around the base or “bas” of the hurl, and further thickening that with another patch of fibre glass in the middle. All this is then bonded using an extremely strong resin – exactly the same materials and method used to repair boats.

“Any hurler who has used it tells me the fibre glass coating also improves the sweet spot, which is what every player looks for when striking a hurl.”

“And I certainly think it has great potential. Although I wouldn’t be the best salesman in the world.”

Indeed most hurlers are sticklers for tradition when it comes to the sort of hurl they like to use, or how much they like to see it modified. There is a preference now for a shorter hurl , between 34 and 36 inches, when 40 inches was once the standard length, a reflection, Dunne reckons, of the modern game, where shorter, faster passes have effectively done away with ground hurling.

However, with the GAA this week announcing a fresh interpretation of the rules governing penalties and frees – or the so-called Anthony Nash rule – any hurl that hits faster, higher and stronger might well catch on. Among those already convinced is Dublin number two goalkeeper Alan Nolan (set to play against Wexford on Saturday evening in the Leinster semi-final), who has had two of his hurls covered in fibreglass at the base.

“He feels it gives him a longer puck out,” says Dunne, “and a better direction too.”

By adding the fibre glass to the bas, Dunne has also done away with the need to add the metal bands around the hurl, and further reducing the likelihood the hurl will crack.

“It’s not an expensive process either,” he says, “and only adds another €5 to the price of the hurl.”

“I actually saw that coming years ago,” he says. “And in fact the GAA should have dealt with it years ago. Players had certainly realised they were able to get away with a lot more, and the whole thing had become deadly dangerous.

“Imagine that Waterford goalkeeper last Sunday had got the belt of that ball in the neck, or the heart. It could have been fatal. No doubt about it.

“But I also think we’ll be seeing a lot less penalties and 20-metre frees scored this summer, given the rule change. So I think it’s really only a short-term solution, and that when it comes back to Congress, they will go with only the one player, in goal, when it comes to those frees.”

Dunne got into the business 30 years ago, the motivation being to find a way to better repair and strengthen hurls. And while the GAA has approved the plastic hurl, or Cúltec, made from materials including nylon and graphite (and favoured by a small number of intercounty hurlers, including Dublin’s Ryan O’Dwyer), mixing the old with something new may well be the future.