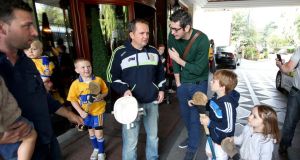 Clare boss Davy Fitzgerald has passed the praise at the capture of the All-Ireland Hurling title on to his players, who he believes proved more than just their ability when Cork mounted a come back in Saturday’s thrilling replay.

Having at one stage led by eight points thanks to three early goals from 19-year-old sensation Shane O’Donnell on his full championship debut, Fitzgerald watched as Cork fought back hard in the third quarter to draw level.

“The biggest test of the Clare team I’ve ever seen was when they brought us back to zero because everything was going against us.” remarked the former Clare goalkeeper.

“It is not down to anything I do, it is down to the boys themselves. These young boys have some resilience. It doesn’t come from anyone else, they are honest kids, they will never give up. They are fellas who will mind themselves over the year.

“I think it showed out there what the story was. They hit us with everything they had and we still came back for more. Very proud.”

The fairytale storyline concerning O’Donnell started with the player being informed less than three hours before throw-in that he was to replace Darach Honan, who has struggled with a leg injury all summer.

Fitzgerald admitted that O’Donnell’s performances in training between the original final and the replay had made it an easier decision.

“Shane O’Donnell in training for the last two weeks has been incredible. We played a match last Friday night in training, A versus B, and I’d never seen anything like it. In 21 minutes we had eight goals and nine points scored and we had to stop it. That’s fact. We said to ourselves, we are going too well. That is the truth. They were flying.

“I only told him at ten to three. I rang him in the last few days and said you are probably going to come on at some stage. We decided just to keep it from him.”

Fitzgerald also praised the contribution of Honan, who scored Clare’s fifth and final goal after coming off the bench, and outlined the serious nature of the injury the player has been carrying all summer.

“Let me make this clear: Darach Honan has been carrying an injury for three months that no one has known about. He has a 16 centimetre tear on his quad muscle for three months. He has only roughly been training once a week. How he has managed to do what he has done is incredible,” said Fitzgerald.

“We just felt if we could get 15, 20 minutes out of him because the injury had taken so much out of him. And my God what a display he gave getting the goal that clinched it for us at the end. There are so many more like him. Just good guys.”

Cork boss Jimmy Barry-Murphy accepted defeat by complimenting Clare, who he said were the better team in both the games.

“Both days really we’ve been playing catch up for the word go. Difficult really, in that situation, you’ve got to do everything right to get back into the game. We did an awful lot of things right but eventually if you don’t do everything, you’ve got to be perfect then at that stage. Our luck eventually run out. We were beaten by a better team, over both days; we have to acknowledge that they deserved it. We’ll take our defeat like men now and move on.”