Experienced Dublin can master a tricky assignment in Wexford Park 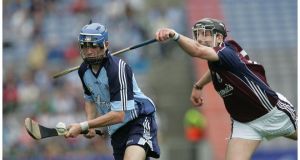 Dublin’s Alan McCrabbe: can cause problems for Wexford’s defence from play and from placed balls. Photo: Alan Betson

There’s an optimal way for underdogs to come in under the radar and Wexford haven’t quite managed it in advance of this evening’s intriguing Leinster hurling semi-final. The mood is to be upbeat for stealth to be a viable weapon.

Twelve months ago they gave Dublin a fright in the championship before deflating in the replay.

Dunne’s hand is stronger this year with Matthew O’Hanlon and Liam McGovern back in circulation and the undivided attention of Lee Chin, whose displays in the half backs are showing the benefits of specialisation.

The five-goal dismissal of Antrim was competent and Wexford have also impressed in recent challenges against Cork – losing by just two points – and Tipperary – putting five goals past them as well. This form combined with home advantage has led to great expectations.

On the other hand Dublin have injury concerns which have led to the loss of a goalkeeper, one All Star, Danny Sutcliffe, with doubts about another, Liam Rushe.

Unless the full extent of the injury situation is being hidden, Dublin can win this. They went to Wexford last year, lugging a lethal cargo of complacency and poor form and yet survived. Selection worries this weekend should focus the mind and injuries aside the team is motoring more satisfactorily this time around.

Dublin have experience, a reliable free-taker in Alan McCrabbe and also the confidence of Leinster champions. It’s not going to be easy but Anthony Daly’s team can survive.