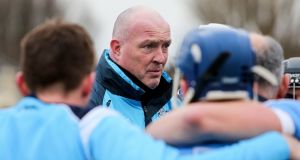 Pat Gilroy: when his team is fully formed, it will likely be made up of big men and hard workers first of all. Photograph: Gary Carr/Inpho

To get a handle on where the Dublin hurlers are right now, it’s worth taking a minute to detail the sheer number of them we’re talking about.

So far in their five Division 1B games in the league, Pat Gilroy has used an eye-watering 35 players. Even in a year when virtually every team is spreading the minutes further and wider than ever before, that’s still six more than the league average and eight more than Ger Cunningham used in the opening five games last year.

And there’s more, just to go Jimmy Cricket on it for a moment. Plenty more. Not included in those 36 are the likes of Joey Boland, Shane Durkin and Peter Kelly, all of whom came back to the panel this year after various periods of time away and are still working on injuries and fitness.

Goalkeepers Gary Maguire and Conor Dooley, both of whom have started championship games in the past two seasons, are in the panel but haven’t seen a minute of action yet with Gilroy favouring Alan Nolan in all games so far.

On top of which, of course, the Dublin manager hasn’t been able to call on a single player from county champions Cuala yet. Up to 10 of them are likely to be asked into the squad whenever they come to a result with Na Piarsaigh, with maybe half a dozen likely to start against Kilkenny in Parnell Park for their Leinster Championship opener in seven weeks.

Add it all together and it’s not beyond the realms of possibility that by the end of 2018, Dublin could come close to trying 50 different players between league and championship. Given that level of flux, any predictions as to where their summer will go must come with a health warning stamped in the biggest, reddest letters. Indeed, it’s unlikely they have a concrete idea themselves just yet of what shape they will be in come the middle of May.

This is nobody’s particular fault, it’s just how things are. Gilroy took over a set-up that had gone through a very public corrosion over the course of the Ger Cunningham years and for which the best and only remedy was to announce a Year Zero and start again.

Whatever carping about the current state of affairs there may be within the city’s hurling community, there’s nobody complaining that players haven’t been given a shot. In a county where the Evening Herald was famously able to name a viable alternative XV ahead of their championship opener against Galway last year, this is a clear step in the right direction.

The exclusion of such a large cohort of experienced players over the past two seasons meant that Gilroy has, in effect, three different pools in which to fish now – the crew that were the mainstays of Anthony Daly’s time, those who were promoted (in some cases ahead of time) by Cunningham in their absence and whatever is coming through an underage system that has seen Dublin in an All-Ireland minor semi-final in each of the past three years.

Somewhere in there, the makings of a competitive inter-county team surely exists. The problem is there is hardly any time to bring it together – it’s virtually certain that whichever 15 takes the pitch against Kilkenny in May won’t have played a competitive game together before then. Gilroy has had no real choice other than to treat the league as pre-season, a trial period during which more or less every jersey is up for grabs. It’s the only option for the longer term, however vulnerable it leaves them in the here and now.

Of the high-profile returnees, Danny Sutcliffe has been the clear stand-out. He was excellent in defeat against Limerick and Galway, the highlight a leader’s goal against the league and All-Ireland champions last month that featured a superb high catch and a scythe through on goal before he topped it off with a scudding low shot to the corner of James Skehill’s net. Sutcliffe was the bright young thing in Dublin’s ranks for long enough – the day before the Galway goal, he turned 26. Gilroy’s reign will coincide with his best years, or at least that’s what all parties hope.

Alongside him in the half-forward line, Conal Keaney is almost 10 years Sutcliffe’s senior. Both of them played their last championship game for Dublin in a qualifier defeat to Waterford in July 2015.

Whereas Sutcliffe was always presumed to be among the first phonecalls Gilroy was likely to make, Keaney’s name popped up out of the blue. Two years retired and with a young family at home, there were no straws in the wind that suggested he might want to get back on a merry-go-round he’d first set foot on as a teenager as far back as 2000.

That Gilroy turned to him at all says much about the new manager’s intent. Inasmuch as they’ve been able to develop a style, Dublin have been looking to take their lead from last year’s Galway team.

Gilroy’s Dublin, when it is fully formed, will likely be made up of big men and hard workers first of all – and anyone who is a consistent combination of both can be reasonably sure of finding favour when it comes to selection. Keaney won’t – can’t – do all the running he was once able for but he will be charged with making puck-outs and clearances stick in the forward line as much as possible.

That has been a problem in most of Dublin’s games so far. Their back line has been relatively settled – of the five players who have started every game, one is goalkeeper Nolan and the other four are defenders. Eoghan O’Donnell missed the first game against Offaly but has played every minute since. Chris Crummy and Paddy Smyth have been heroic right through the campaign, with Crummy in particular growing into the leader everyone suspected him to be.

By contrast, Dublin have given game-time to 22 forwards between starters and substitutes over the five games. Sutcliffe, Keaney and Donal Burke have built up the most minutes but the chorus line of bit-part players around them tells the story of Dublin’s league so far. Everybody can hurl but few enough of them have been able to make the sort of impression that dares Gilroy to do without them.

Fergal Whitely played the first three games but hasn’t been seen since. Ronan Hayes stuck 2-4 from play against Laois the last day but whether that was a portent of the future or never-to-be-bettered flash-fire remains to be seen. Paul Winters has been a sharp-shooter when the chances have come his way but Gilroy needs more. Ryan O’Dwyer has been brought back into the team in recent weeks, presumably to provide it. Paul Ryan may or may not make the cut for the summer, Eamon Dillon should but hasn’t played since the Antrim game seven weeks ago.

They could do with a fit and firing Liam Rushe but all they’ve been able to squeeze out of him so far is three substitute appearances, all in the forward line. Rushe’s groin troubles aren’t new and may even require a trip to the surgeon at some point. But with the summer looming, they will surely push it back to the off-season and let him figure it out as he goes in the meantime.

The likelihood is that Cuala’s Seán Moran will be installed at centre-back when the time comes, with Crummy and Shane Barrett either side of him, leaving Rushe to find a spot in the forwards.

His ball-winning qualities are badly needed in the team in general but more especially in that sector. Gilroy won’t be the first Dublin manager to view him in this fashion – Cunningham had decidedly mixed success with the idea in the past. But Rushe is such a bellwether player for Dublin that they can’t really afford for him not to have an effect.

All of which just goes to underline the main point – Gilroy has plenty of potential on his hands, if he can harness it correctly. Nobody imagines their season is going to get kick-started against Tipperary tomorrow; indeed the move to Croke Park has been greeted with a shudder by many in the Dublin hurling fraternity. Not only is their record better in Parnell Park, both their home games in the Leinster Championship will be played there.

The one person known to be happy about the switch though is Pat Gilroy. He has been consistent from the outset that he wants as many Dublin games as possible to be played at headquarters. Dublin may well have had a better chance of beating Tipp last Sunday in Donnycarney but that isn’t what he or they will be judged on. In the fullness of time, the games that matter will be in Croke Park. That’s the place to play, that’s the place to win.

In these early, early days when everything is flux and nothing is certain, there’s no downside in being consistent on that at least.

DeChambeau has Majors on his mind as he defends in Dubai 16:21
Jack Byrne has Euro 2020 ambitions but Rovers come first 16:08
Saracens say they want full salary cap report to be published 15:44
Edinson Cavani likely to choose Atlético over Chelsea 14:48
Marcus Rashford expects to be fit to help United ‘claim top 4’ 14:39
Crossword Get access to over 6,000 interactive crosswords