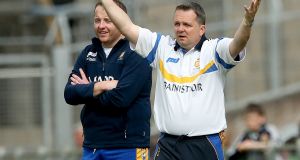 Davy Fitzgerald: “This is still a very competitive division, trust me. We have to go down to Laois and to Limerick still . . .” Photograph: James Crombie/Inpho

Even with all his ducks lined up in near perfect order, Davy Fitzgerald still sees some misalignment with the Allianz Hurling League. The format, says the Clare manager, is unbalanced, the timing still a little off too.

Sunday’s win over Wexford extended Clare’s unbeaten start to the year, and they’re now favourites to secure the sole promotional position from Division One B. But Fitzgerald would still prefer a return to a top flight of 12 teams, divided into two mixed-ability groups of six counties, as was the case most recently in 2008.

“I’d still love to see the two divisions play out together, personally, and give us all more competitive matches,” says Fitzgerald. “We played the Munster league in January and that was wicked competitive.

“And I don’t see any reason why they couldn’t start the league a few weeks earlier. And for the likes of teams in Division One B, who have never got up to play in One A, it’s the way to improve, when you are playing the best teams all the time.”

“This is still a very competitive division, trust me. We have to go down to Laois and to Limerick still, and you’re at your peril if you take them any way relaxed. I remember the year after we won the All-Ireland we played Laois, and we beat them by four points, and we were lucky to get out of there.

Fitzgerald is not the only one with reservations about the current format. Waterford manager Derek McGrath has also spoken about the existing format, and timing, of the league, and he too prefers a top flight of 12.

Part of McGrath’s concern was that the tight schedule and ultra-competitiveness of Division One A made it nearly impossible to trial players during the competition, the situation not helped by the fact the opening rounds clashed with the Fitzgibbon Cup.

Indeed the Allianz Hurling League takes a break this weekend to allow for the staging of the Fitzgibbon Cup semi-finals and finals – hosted by Cork IT. But that doesn’t mean a break for either Fitzgerald or several of his Clare players.

Fitzgerald also manages the Limerick IT team, one of the three Limerick colleges to reach Friday’s semi-finals.

They will face Limerick’s Mary Immaculate College (coached by former Limerick manager Eamon Cregan), while the other semi-final will see the title holders University of Limerick face UCD (who are looking to make it a Sigerson-Fitzgibbon double). The final takes place on the Saturday.

Among the Clare players involved are David Reidy, who plays with Fitzgerald’s Limerick IT, Colm Galvin (Mary Immaculate College) and also Jack Brown and David Fitzgerald, who both play with the University of Limerick.

Galvin, however, remains an injury doubt, a victim it seems of trying to serve two masters at once. He played for Mary Immaculate College in last week’s quarter-final but sustained a hamstring injury which kept him out of Clare’s four-point win over Wexford on Sunday.

Clare, who travel to Laois on Saturday week for round three, still have several big names to return to the playing field, including Tony Kelly, Shane Golden, Cathal Malone, Podge Collins, Seadna Morey, and Pat Donnellan.

Darach Honan and Brendan Bugler were both named to start against Wexford but were withdrawn as a precaution.

Sunday’s win means they have hardened into 4/6 from 4/5 to win Division One B of the league.