Between them, Gearóid Hegarty and Tom Morrissey plundered 12 points from play 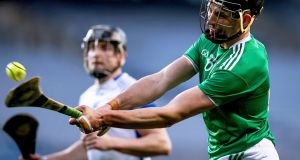 They are who we thought they were. As Jackie Tyrrell was writing in these pages only last Friday, there are plenty of years when the heroes of the All-Ireland final are players who get barely a mention in the pre-match notices. This, it turns out, was not one of those years.

All week we wondered what response Waterford would find for the questions asked by the Limerick half-forward line. But answer came there none. In the man of the match stakes, Gearóid Hegarty crossed the line in front, with Tom Morrissey the perfect lead-out man. For once, Cian Lynch was more of a willing domestique but no team survives without plenty of those.

Hegarty finished the day with seven points, Morrissey with five. They barrelled about the place combining the menace of the Kray twins with the accuracy of the Williams sisters. They ransacked the Waterford puck-out, tackled with the abandon of corrupted dodgems and generally careered about the middle third like over-sugared toddlers. Except they’re built like panzers and struck just about everything over the black spot.

“Tom and Gearóid are brilliant players but their work-rate apart from that is huge,” said Lynch of his half-forward partners afterwards. “It epitomises them as people. They are 100 per cent in everything they do. Whether it’s in the gym, on the training pitch, it doesn’t matter – they are 100 per cent about it. And they’re reaping the rewards of it there.

“They were unreal today, in fairness. All year the two of them have been doing it, which is consistency and something you look to. And they’ve said, without the guys out here pushing those lads or pushing us, today wouldn’t have been possible. So we keep dedicating it back to the lads that weren’t able to tog out today and weren’t able to be out on the pitch.”

Morrissey scored the first and last points of the day, the sort of statistical quirk that ordinarily you wouldn’t make too much of a fuss over and just put down to happenstance. Except here, it feels entirely appropriate that he bookended the afternoon. He and Hegarty had been central to so much of the Limerick display, both on the scoreboard and beyond it.

It can’t be ignored that not all of it was what you’d call colouring inside the lines. Hegarty alone ended the day with five frees given against him and Waterford would have reasonable cause to wonder at why that number wasn’t higher and how he escaped a yellow card. Seven points from play in an All-Ireland final is a golden day’s work and he will walk the Hurler of the Year stakes. But don’t be surprised if opposing managers start dropping his name in cough-cough dispatches as next year rolls out.

That’s for the future though.

Here and now, Limerick’s 10 and 12 were irresistible, especially in the third quarter. Stephen Bennett’s goal chance just before the break was forced and untidy and never really worried Nickie Quaid. But what it did do was give Limerick a brief glimpse of the delicate nature of things.

A slightly bigger opening, a marginally better strike and matters would have been level at half-time. Hegarty and Morrissey came out and attacked the restart as if they were offended by the very idea. Limerick scored 10 points in the third quarter – four came from Hegarty, three of which were set up for him by Morrissey. There was a point in there for Morrissey too, this time fed by Lynch.

Waterford could see the damage being done but they were powerless to stop it. Losing Tadhg De Búrca obviously didn’t help matters but they’d have needed three of him here – one to mark each of them and another to drop in the hole and cover off the space.

Somehow, even as he was the best player on the pitch and surely unmissable as a consequence, Hegarty still kept managing to lope into space, thoroughly unfettered by any Waterford attention. It’s not like they were ignoring him, more that Limerick’s knit-one-purl-one passing always seemed to end up with him hand-aloft, seven yards removed from any cover.

Pass, strike, score. Pass, strike, score. By the time the second water break came around, Limerick had turned a three-point half-time lead into eight. Limerick’s half-forward line were in complete control now, so much so that when Kevin Moran and Calum Lyons finally broke free to try to affect the game themselves, they were required to land two of the more incredible scores of the day to do so.

When you need miracles just to keep stride, you know the other crowd have your number. But they needn’t feel too down about it. In 2020, the Limerick half-forward line had everyone’s number.