Cuala stay top of the pile in Dublin 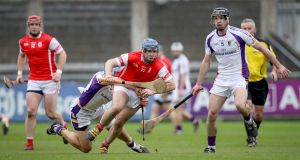 The All-Ireland champions rode their luck to a certain degree but two late scores from David Treacy ensured a hard-fought win.

Kilmacud played with the benefit of a strong breeze in the first-half and opened up brightly through scores from Lorcan McMullan and Oisin O’Rorke.

Further scores from Fergal Whitely and Sean McGrath extended their advantage but a Darragh O’Connell goal in the 18th minute proved a massive blow to Kilmacud’s ambitions.

Treacy and Con O’Callaghan added points soon after with late scores from O’Rorke and Whitely trimming Crokes’ deficit to 1-5 to 0-6 at the break.

A brace of O’Rorke frees levelled matters by the 36th minute and Crokes were further buoyed as Eoin Dalton repelled a 38th minute penalty from Treacy.

However, with Sean Moran and Cian O’Callaghan imperious in the Cuala defence, the holders edged home as Colm Cronin, Treacy and Con O’Callaghan shared six points to see their side over the line.