Cork reaction: It’s a fair result from our point of view because they might have edged it 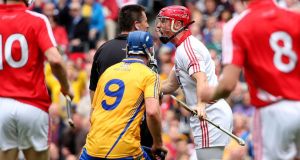 Like the man who having fallen from the World Trade Centre, landed safely after being borne on air currents generated by the swirling heat, Cork manager Jimmy Barry-Murphy was more relieved at the immediate fact of survival than the traumatic process.

Having trailed for virtually the entire All-Ireland final, his team hit the front in the dying seconds only to be hauled back by a Clare side who must have seen the whole championship flash before their eyes.

“I’d have to be honest and say it’s a fair result. It’s a fair result from our point of view because they might have edged it probably. But our lads showed great character when they looked to be struggling in a lot of places, the commitment they showed and the spirit they showed, I am very proud of that.

“It was like the Dublin game, when you are involved in it it’s very hard to be on the sideline. I thought it was a great occasion, great match, some great scores from both sides and Clare were brilliant on the day.”

He even acknowledged he had contemplated the worst at a couple of stages throughout the afternoon.

“I did, certainly. Thought the game was drifting away from us once or twice. That’s why I thought they showed great spirit to come back when it looked gone from us – I think with 10 minutes to go we were four down. I looked at the clock and didn’t think it was going to be our day. I’m thrilled with the lads for their spirit and to fashion those goal chances was brilliant I thought.

“Clare half-backs were very strong today, they are an excellent team, strong under the ball and we found it hard to get the ball into our inside forward line. But fair play to our lads, they were struggling but stuck at it.”

Having settled for that road, JBM wasn’t going to be tempted down more recriminatory paths. The two minutes added for stoppages expired after Stephen Moylan’s line ball drifted wide but the ‘at least’ clause kicked in and play ran for long enough to see Clare equalise.

“Look, it’s the referee’s call,” said the Cork manager. “There were a couple of decisions that might have gone our way. I have no criticism – I thought the referee was excellent.”

Prime among the decisions that went Cork’s way was the failure of referee Brian Gavin to send off Shane O’Neill at the end of the first quarter for striking Darach Honan.

At the other end Cork took to scoring goals, trebling their one-goal tally for the summer in the second half. This was something else Barry-Murphy took in his stride. “Yeah, I have said this before. I never worry when I hear this talk of us not getting goals. We have got to an All-Ireland final; we mustn’t be doing too much wrong. Goals tend to come when you need them. Lucky for us, they came when we badly needed them.”

The other side of the coin was provided by Patrick Horgan who came tangibly close to scoring the winning point in an All-Ireland final. He bristled at the suggestion Cork had been out-played.

“We got three goals like. You’re criticising us all year for not getting goals. We get three and then you’re saying they’re better than us. What are you on about, like?”

It was ventured that maybe their being out-played had been the consequence of nerves.

“ Did the occasion get to you?

“It took you so long to get to grips with it?

“Sure we were up by a point like, how could it get to us? We were two seconds away from winning an All-Ireland so I don’t know what you’re all going on about really.”

Beyond the parallel universe, Jimmy Barry-Murphy wasn’t sure to what extent he had an injury problem with replacement Cian McCarthy, who had to be taken off again eight minutes after taking the field.

“Not sure. Cian McCarthy struggled with an ankle injury so we have to assess it when we go back.”