Cork forwards can make off with Limerick’s silverware 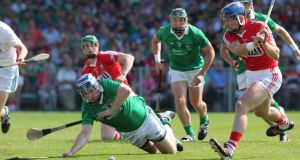 I was very impressed by Cork when they beat Clare but a couple of things have complicated the overall picture going into tomorrow’s Munster final. Clare were fortunate not to be beaten at home by Wexford last week and Cork have had to allay injury concerns about Mark Ellis and Damien Cahalane.

Limerick beat Cork in the Munster final last year and I’m of the view that they’re better than people seem to think.

The main question mark over them is last year’s All-Ireland semi-final but I think that needs to be erased as evidence because in hindsight everything that could go wrong did go wrong.

They’ve also been impressive in how maturely they dealt with losing Donal O’Grady as manager. They went to Thurles – traditionally a tough place for them – and when they needed to, hurled up a storm just as they’d done at home last year.

They’ve a powerful defence – the half-back line played well against Tipperary, James Ryan looks ideally suited to the middle of the field, even more so than at centre forward and the forwards contributed the last day.

If there’s a doubt it’s probably about the depth of their panel but with the experience of losing that All-Ireland semi-final last year and its hard lessons, they’re well placed to go down to Páirc Uí Chaoimh.

I’ve fancied Cork from early on this year and to date the new players have made a big difference. It would have been damaging to lose any of them to injury .

Even allowing for the Pa Horgan sending off last year Limerick deserved to win. Pa Cronin did a savage amount of work in the second half to get Cork back into it but the Limerick defence was solid.

This year, I think the forwards will be better. Assume Cork won’t have someone sent off and then look at the improvements Jimmy Barry-Murphy’s made. Alan Cadogan has been outstanding and so far the attack has revolved around him and Horgan, who has become an outstanding player.

The other thing Cork bring to this match is desire to win the Munster title. I’ll be surprised if Cork have lost those feelings of motivation after losing last year’s All-Ireland and that desire to win a title in the last game in Páirc Uí Chaoimh is significant.

Their defence is also better set up. Damien Cahalane has played himself in at full back but against Clare he was well able to come farther out and leave Stephen McDonnell in there. Mark Ellis is a formidable barrier at centre back and his presence has allowed Chris Joyce and Lorcán McLoughlin to hurl at wing back.

The changes this year have made the Cork panel stronger with players like William Egan who started last year now coming in off the bench and Paudie O’Sullivan, back after injury, who would be starting if he was a Limerick player.

For me Cork have the more potent forward-line. Limerick’s isn’t bad but not as good as Cork’s – for instance they got their goals from Tipp mistakes and I don’t think they have the same all-out penetration.

We could be looking at the two best sides left in the championship but tomorrow will shed more light on that.

This afternoon Clare head to Wexford Park. Even in Ennis I thought this was not a foregone conclusion and even though the All-Ireland champions showed some improvement to get the draw they’re nowhere near the required energy levels and form to retain the title.

They looked more comfortable when Pat Donnellan was deployed as a sweeper but I’ll be surprised if they really improve significantly; you can’t just flick a switch. There’s a lack of focus about them between getting distracted on the field and off it, overreacting to match officials’ decisions.

Wexford’s problem is that whereas they’re greatly improved they’re still not able to put teams away. Some of the decision making is poor and shooting is erratic but these are problems of inexperience. Conor McGrath’s in form but Clare are still vulnerable. Can Wexford put them down? I don’t think so but wouldn’t be surprised of they do.

Finally this evening, Tipperary should follow up their win over Galway by defeating Offaly. Tipp aren’t the finished product and have questions to answer at three and six as well as about their use of the ball. This won’t tell them much but it will give them the opportunity to kick the bad habits.