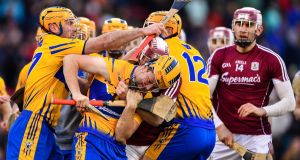 To the particularly lively fans huddled along what we were told is the first base of this old ballpark, it might well have been the Boston Red Sox they were cheering on, right after hitting a home run.

There’s certainly no denying the enthusiasm here for the AIG Fenway Hurling Classic - the 11-aside version of hurling designed specifically for the expat market, and who naturally made up the majority of those in attendance at the famed old Boston Grounds.

It was about three-quarters full. They came to witness what was billed as the ancient warrior game, and some probably left scratching their heads. The fastest field sport in the world played at a faster pace - at times hard to keep pace with. Goals only, the fluorescent sliotar darting above the beat-up turf, the afternoon sun setting behind the hallowed stands.

It ended with All-Ireland champions Galway losing out to Clare in the final, 50 to 33, after two 20-minute halves: Galway had earlier taken out Dublin in the first semi-final, Clare just about beating Tipperary in the second, and all four teams served up a game with no lack of enthusiasm.

Peter Duggan hit 27 points, making the most of the five-pointers - goals scored from outside the 29-yard line. Jason Flynn and Joe Cooney tried hard to claw back to deficit at the end but Clare were deserving winners, collecting the Players Champions Cup for the first time.

“Where else would you get the opportunity in the middle of winter to play on a really good pitch like that?” Said Clare joint manager Donal Moloney. “And to stay together as a group for four of five days? Playing Fenway Park for all of us, players, management, officials, that’s a special memory for everybody.”

It opened with Amhrán na bhFiann - twice - then the Star-Spangled Banner. Liam MacCarthy and the Sam Maguire paraded onto the field at half time and the stadium announcer did his drum up enthusiasm too, rewarding each scorer with a short personal tribute.

Fenway Park certainly looked the part: marked out for American football (Boston College beat UConn here on Saturday night), the old turf has probably seen better days, but as the oldest baseball stadium in America, there was no disguising the history of the place.

Hurling had made its debut here two years ago, the Super-11s version of the game was only dreamed up four years ago, but the intention is to make this an annual event.

Galway took out Dublin in the first semi-final, leading from the throw-in they went on to win 55-39. Ten minutes into that game, some shoving broke out in front of the Galway goal, only unlike two years ago, nothing that was going to make the headline news.

On more notable terms the game might will be best remembered as the first competitive game in charge for Dublin manager Pat Gilroy, albeit on a losing note.

“The enthusiasm of the boys has been fantastic,” said Gilroy. “The response from the clubs and everyone around it has been great. We have had very little time to get together but everyone has rowed in behind us, the county board and everyone. I have been pretty happy with it so far.

“We could only bring 26 of them here, we have another 20 lads, and we’ll whittle down come Christmas time. We had that regional tournament that went very well. There was one or two guys who were older who said that they didn’t fancy doing that but pretty much the response has been 100 percent.”

And so far, says Gilroy, it’s more or less about applying the same principles and practices that saw him deliver Dublin the All-Ireland football title in 2011: “The rules are broadly the same here. There’s an awful lot you can bring in from one to the other and vice versa. I’d be very comfortable about hurling and the challenges that are involved.

“At the end of the day, you’ve points and goals to score and you’ve got to stop others doing it. You can get over complicated about this game, or you can break it down into something that’s simple and make it clear that’s what everyone needs to do. That’s what we’ll set about to do, make sure everyone is clear about their job and that pick the best people that are doing that and keep it simple.”

They played The Pogues on surround sound on the way out and the official attendance of 27, 862 appeared to go home with enthusiasm to share.