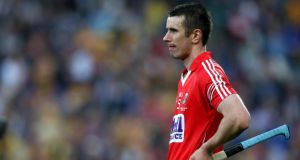 The Cork hurling squad will miss the experience of former All-Ireland winner and All Star Brian Murphy, who has conformed his intercounty retirement. Photograph: Ryan Byrne/Inpho

Murphy’s decision – announced by the Cork county board yesterday – wasn’t entirely unexpected, even though he’s still only 31, as he had yet to return to Cork training this year.

He informed manager Jimmy Barry-Murphy prior to Cork training on Tuesday night he was opting out.

“While we are disappointed to lose Brian, we wish him well in his retirement,” said Barry-Murphy. “He was a hugely influential player, and I would like to thank him for all his efforts.”

Indeed Murphy made an extra effort to get back to match fitness last summer, having broken his collarbone playing for his club, Bride Rovers, in June: he made it back just in time for the All-Ireland final against Clare, actually replacing Tom Kenny, Cork’s only other surviving All-Ireland winner from 2004-2005.

Kenny announced his retirement last December, aged 32, and Murphy’s decision to walk away perhaps reinforces the notion of the ever-shortening intercounty career.

Neither player opted out because of injury, reinforcing the notion that intercounty commitments are becoming more difficult for the older players.

Murphy, also like Kenny, intends continuing playing for his club.

Murphy’s experience will be missed: the two-time All-Ireland winner also won three Munster titles, was an All Star in 2006, and was named Young Hurler of the Year in 2004, having made his debut the year before, against Wexford.

There is, however, still one connection to that last All-Ireland winning era in defender Shane O’Neill, who was a panel member in 2005, although he was a non-playing substitute in that final.

The Wexford team to face Laois in Sunday’s potentially pivotal game in Division 1B of the Allianz Hurling league has been strengthened by the return of forward Rory Jacob into the starting line-up.

Off the bench
Jacob came off the bench and scored 1-2 against Limerick last Sunday, although that wasn’t enough to prevent a narrow defeat. Also coming back into the starting line up are full forward Gary Moore and half back Ciarán Kenny.

Elsewhere, Mount Leinster Rangers have confirmed forward James Hickey will be play some part in their All-Ireland hurling club final in Croke Park on Monday – if only in the pre-match photo shoot.

Hickey won’t feature in the game, however, after sustaining cruciate knee ligament damage in a challenge match against Offaly almost three weeks ago.

Hickey’s long involvement with the club means the 32-year-old will still tog out on Monday with his team mates – before they take on Galway champions Portumna.

Despite his injury setback, Hickey wants to play his part on St Patrick’s Day.

He said: “I’d like to put the jersey on in Croke Park. To be on crutches would take away the bit that’s still left.”

The first-time Leinster champions remain rank outsiders, despite upsetting the odds in practically every game throughout their club campaign.

Portumna will start as favourites for obvious reasons: they’ve already won the All-Ireland title, in 2006, 2008 and 2009, their only defeat at this stage of the competition coming in 2010, when Kilkenny champions Ballyhale Shamrocks denied them a three-in-a-row.

Harrington would prefer 12 picks over delayed Ryder Cup 09:06
Australian rugby staring into abyss as another crisis hits 09:03
Ringrose set for new central deal; memories of Björn Borg at Wimbledon 06:51
Seán Moran: What nostalgia tells us about how the GAA sees itself 09:05
Six Nations rugby needs to be protected for terrestrial TV 07:43
Crossword Get access to over 6,000 interactive crosswords