Brian Cody confident Eoin Larkin will be fit for final 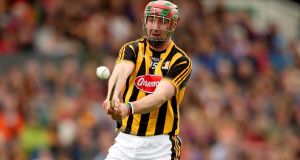 “Eoin, barring something else happens, will be available for selection. There’s no doubt about that, and we have no concerns about Eoin’s participation.”

Brian Cody has “no concerns” over Eoin Larkin’s participation in the All-Ireland hurling final on Sunday week. Larkin sustained a hand injury at training over the weekend, but the Kilkenny manager is more than confident he’ll be fit to play.

“Eoin, barring something else happens, will be available for selection,” said Cody, speaking at the Kilkenny press evening. “There’s no doubt about that, and we have no concerns about Eoin’s participation.”

Likewise with fellow forward Ger Aylward, who took a heavy knock in the All-Ireland semi-final win over Waterford: “Ger is fine as well. Ger has just got a slight knock, it’s nothing, a bit of bruising. It’s par for the course type of stuff.”

However, things are far less certain concerning defender Jackie Tyrrell, who is nursing a stress fracture in his foot: “Jackie, as you know, has a stress fracture and he missed out on the semi-final the last day, and has been in a boot for a few weeks.

“He’s out of it now and it depends on how he recovers from that and we’re not ruling him in or ruling him out at the moment. He’s not back, yet he’s just working his way back now and we’re hoping he can get back running and can get back doing everything he needs to do quickly, but that remains to be seen. But right now it’s just that we don’t know.

“We’ve an open mind on it, he’s kept himself fit, he’s worked away in the gym, his fitness levels are massive anyway, so fitness won’t be a problem for Jackie at all. It’s a question of whether the injury will have healed sufficiently to allow him to do what he has to do, or what he needs to do.”

Indeed, Cody also holds out some hope that Richie Power will be back to play any part in the final: “Richie Power is pretty good at the moment, to be honest about it. “He’s training, and he’s worked very, very hard all year, he hasn’t got any game time at all this year because he couldn’t, he just wasn’t ready for it.

“His ability to partake in training has picked up since the semi-final. He’s had a tough year, no doubt about that, could have come into the reckoning? He could, he could, yeah.”

1 Sonia O’Sullivan: Taming The Tan gave us one last roll of the dice before shutdown
2 Premier League stress to PFA that players need to take pay cuts
3 Karen Robinson Walton: I am looking at him. I say ‘Benjamin, what have we done?’
4 Leona Maguire knows staying put was the right choice as rookie season halted
5 Ian O’Riordan: The aloneness of the long-distance rider
Real news has value SUBSCRIBE

Final record attempts before lockdown; underage rugby feeling the effects 06:59
Premier League stress to PFA that players need to take pay cuts 06:34
Reality Bites – Tales from the new normal: Shane O’Donnell 06:30
Sonia O’Sullivan: Taming The Tan gave us one last roll of the dice before shutdown 06:15
Ireland’s underage rugby stars miss out on chances to shine at Easter 06:18
Crossword Get access to over 6,000 interactive crosswords