Up to the 50th minute, the capital county are the best, but then it all seems to go downhill 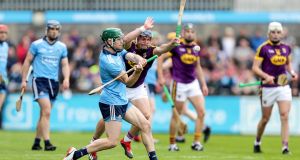 Dublin have failed to win five of their six Leinster round-robin matches since the start of the new format last year - albeit after 50 minutes they’ve led in five of those same six.

After a run of near-misses and ones that got away, their average losing margin is less than three points. In three of their four defeats they led after 50 minutes: by six points against Kilkenny last year; by one against the then-reigning All-Ireland champions Galway a few weeks later; and likewise against Kilkenny this year, before losing by five points. They also led by three in last weekend’s draw with Wexford and by 16 points in their win over Offaly last summer.

Moving into the final 15 minutes they remained in the lead in two of those four defeats, they were drawing in one but still losing the other. And by the 60th minute they led in one, were drawing in another and losing the remaining two.

So, from the 50-minute mark things have been going downhill, at varying speeds, for the capital county. But up until then, they’re the best in the province.

If last year’s final Leinster round-robin standings were combined with this year’s two opening weekends, of the four counties who have competed in both seasons, Dublin would be bottom of the pile. Despite playing a game more than half of them.

However, if, purely for illustrative reasons, every match was to conveniently be cut short after 50 minutes, well . . . then Dublin would flip up to the top of the pile.

They’d have had five wins and a draw with a scoring difference of 22. Galway, who top the real-life table, come in next: they’ve played a game less and won four of five. But Dublin would have them on a head-to-head even if they were ahead after 50 minutes against Wexford this weekend. The Tribesmen beat Dublin by a point in their last match of the 2018 Leinster series but trailed by a point with 20 left on the clock.

Interestingly, Kilkenny would be last in this make-up scenario, because despite winning five of their six Leinster round-robin matches since its introduction, they’ve trailed in four of their six matches after 50 minutes. Typically, though, they went on to win three of those four.

The polar opposite of the Dubs then. So, what’s the reason for Dublin’s late-game jitters? For starters, their efficiency in those especially pressurised moments is letting them down.

It suggests that Dublin are creating the chances to build on their good work over 50 minutes, but just not taking them

In their two matches thus far in the 2019 championship, they’ve converted 1-9 from a possible 3-17 in the final 20 minutes. That’s a scoring efficiency rate of 46 per cent at the most decisive stage of the match. Their opponents – Kilkenny and Wexford – managed 3-12, while their combined scoring chances amounted to 4-15. So that’s an efficiency rate of 78 per cent. Kilkenny scored an impressive 1-8 of a possible 1-10 at Nowlan Park, but theirs and Wexford’s combined created chances amounted to only a point more than Dublin’s for the two matches.

Twelve months earlier and Kilkenny scored 1-10 of a possible 1-11, while the Dubs had the chances to score 1-8 in the closing 20 minutes, but only converted five points. So that suggests, and essentially confirms, that Dublin are creating the chances to build on their good work over 50 minutes, but just not taking them. When they need to keep the scoreboard ticking, avoid a momentum surge and see out the win – or be the ones to push on – they’re taking the wrong options with poor shooting execution.

However, in their defeat to Galway in Salthill last June, they managed to convert 0-6 of a possible 0-7 during the same highlighted period, and still lost. That’s where their other final 20-minute failings let them down.

In that encounter they lost the puckout battle 10-8 in those closing stages; most notably, though, they lost seven of the last eight puckouts. They lost the puckout battle 11-8 against Kilkenny both last year and again this year, and in both matches they sustained periods of losing four in a row but never won more than two consecutively themselves.

This might all paint a picture of a team lacking appetite, when the game is in the melting pot, but that is not the case

Last weekend the same flaws came to the surface once more as they won only three of the final 15 puckouts, and two of them were taken short. Wexford went through one stretch of winning six in a row and also won seven of eight at one stage. Periods like that allow for opposition to build huge momentum, with time at a premium.

This might all paint a picture of a team lacking appetite, when the game is in the melting pot, but that is not the case. In that same match Dublin made seven turnovers to Wexford’s five in the final 20 minutes, and won 14 of the 21 contestable balls (not including puckouts).

They also made more turnovers against Kilkenny a week earlier and a year earlier – although the Cats did get the better of them on both occasions in the battle for contestable balls (16-11 last year and 8-5 at the start of the month). Galway did outdo them 6-3 in regards to the turnover count, but the two teams were honours even in winning contestable possession.

So essentially, in keeping with the traditional markers for effort and heart – winning 50/50s and making turnovers – Dublin are remaining competitive right through to the final whistle.

However, they simply won’t get over the line with their current conversion and puckout statistics for the crucial stages of the match. And the round-robin series is an unforgiving place for a 50-minute team.

1 Ken Early: Ken Early: Why international football is fading into obscurity
2 ‘A radical departure’: Who are CVC and what are their aims with rugby?
3 Connell losing touch with club championship is real tragedy of Normal People
4 Colin Kaepernick’s exile is too fresh for NFL to speak out on US protests
5 All in the Game: Nigeria bite back in war of words with Redknapp
Real news has value SUBSCRIBE