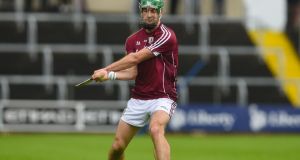 It is put to David Burke that Galway hurlers do not seem to have fragile minds. And yet, capitulation at the hands of Kilkenny in last year’s All-Ireland final and the recent Leinster decider sees this accusation flung at them time and again.

So far the soundbite of the hurling championship belongs to Ger Loughnane, who wrote they had “no guts whatsoever”. Insiders looking at those in paid media roles, like outgoing Limerick manager TJ Ryan, believe the former Galway manager’s comment went beyond brinkmanship.

“Kilkenny are the benchmark and it has happened against them more than anyone else,” Burke responded. “We have beaten every other team in championship at some stage, bar maybe Waterford.

“I don’t know if it is a thing that players in Galway let seep into their mind from things that are said. Maybe the general people in Galway might be a bit soft in that ‘Aw, we’ll go up and compete anyway. If we win we win, if we lose we lose.’ Whereas you can see in Kilkenny, even talking to people, they want to win all the time. That’s their mentality and that reflects in the players as well.

“I think things are changing, I can see it. I know it might not have been shown the last day but there is a bit of change coming there.”

Burke, speaking at the launch of the All-Ireland hurling championship at the National Games Development Centre in Abbotstown, has stared down this conundrum since losing an All-Ireland minor final to Kilkenny in 2008.

“I suppose with all the social media now sometimes it can be hard,” said the 26-year-old midfielder. “When you meet people on the street, when you meet family, they’re always kind of talking about it, but sure, look, since I’ve been there it’s kind of always there, going back years.

“There’s that bit of stick but you kind of get used to it and get on with it. It’s not too bad. I don’t really read anything in the papers.

“Look, it’s been harsh but some of it’s probably true as well in a way. The last day some of the leaders on the team, even myself, probably didn’t stand up enough when Kilkenny really went to that extra level.”

“Since [Brian] Cody took over, ourselves and Cork are the only teams that have beaten them three times in championship. Tipp have only beaten them once.

“We had them kind of rattled [in the Leinster final] and I thought they were kind of panicking a bit. They brought on Richie Hogan, who’s a serious lad to bring on, and he kind of got them out of a small bit of a hole after half-time.

“They seemed to find that little bit more. I don’t know how they do it. They turn it over quickly and get fast ball in then and you’re kind of caught.

“With Kilkenny, it’s their ability to get in last-second tackles and not giving you a second at even picking the ball up off the ground. It’s their ability to keep the ball in them kind of ruck situations. There’s no real tactics, it’s just their work rate is way better.”

“He got a bit of stick last year but he has actually added something to his game last year that people didn’t really see.

“In the years before that everything was expected to be on him, whereas last year other players stood up around him and chipped in with a lot of scores. That was the ability of him to bring others into the game. He is doing that again this year. Things just didn’t go well the last day. He hit frees well, if you can take one positive out of the game. I’m sure he will know himself, he is a serious quality player and Clare backs know full well when he is in form he is hard to stop. His ability to take [out] two or three backs and then maybe another Galway forward can come up trumps – the likes of Cathal Mannion, Conor Whelan or Conor Cooney. ”