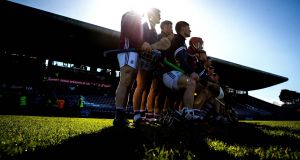 The suspension of all GAA activity this week may permanently curtail this year’s Allianz Leagues but Galway hurlers arguably have already got what they needed.

Saturday’s scheduled quarter-final against Leinster champions Wexford would have presented further opportunity – not least because they are scheduled to go there in the championship – but the sudden hiatus arrives with Shane O’Neill’s side in buoyant spirits.

Galway’s most recent two matches, both at home, have ended with Cork and All-Ireland champions, Tipperary sent home with tails between their legs and the home support greatly heartened.

“I remember in ’17 in a quarter-final, against Waterford in Pearse Stadium, after a poor first half they just opened up in the second half and won with a turnaround of 13 points. A lot of people when Galway won the All-Ireland pointed out that day as a turning point.

“Similarly a year later, Limerick came to Galway looking for a league win and really powered on in the second half. Everyone was saying, they’re a team going places and they won the All-Ireland a few months later.

“The same could be said about last Sunday. It was a turning point and important for them as well because it had looked like they were reverting to the reliance on Joe Canning in the forwards.

“But when you look at [Conor] Whelan and Brian Concannon inside – and I know Tipperary were a bit naïve not to play a sweeper – and Evan Niland’s frees they looked like a team with intent.”

After a phase of uncomfortable reflection by the county’s hurling community that maybe it was Pádraic Joyce’s footballers who were emerging with all the rising talent and not the hurlers, optimism is beginning to resurface.

None of this was particularly foreseeable when Micheál Donoghue shocked the hurling world last August by stepping down as Galway manager amid rumours of deteriorating relations with county chair Pat Kearney.

Donoghue had resolved the county’s almost tangible angst by driving the standards that led to the first Liam MacCarthy success in 29 years. He ended 2017 as the Philips Manager of the Year and nearly made it back-to-back All-Irelands 12 months later. His departure came after a downbeat year but no-one wanted him to go.

Further surprise followed when his lieutenants Francis Forde and Noel Larkin declined to take up the baton and the county opted for Shane O’Neill, a low-key appointment, which ran the danger of looking underwhelming.

To most outward appearances, the task looked fraught with unwelcome complications.

Unsurprisingly to those who know him best, O’Neill has however turned out to be a good choice. An All-Ireland-winning coach with his club, Na Piarsaigh, who he also led to a second final, his intelligence and lack of an outsized ego have enabled him to create a positive environment.

His distance – he’s a partner in a Limerick solicitors’ practice – frees him from any suggestion of agendas or questioning of his impartiality. His ability to communicate and listen has created a harmonious environment.

He also was clear from the start that he intended to leave Galway hurling in a better position than the one he inherited – not out of disrespect for an All-Ireland-winning team but as acknowledgement that evolution would be necessary.

In that O’Neill has been as good as his word and has given 31 players the opportunity to play themselves on – and off – the team. In the words of one experienced observer, “he’s been good at encouraging players”.

This category includes Brian Concannon, first picked by Donoghue but more as a panellist and now developing into a quality inter-county corner forward whose influence on the second-half comeback against Tipperary was considerable.

Darren Morrissey at corner back was always one of the top prospects since captaining the minors to an All-Ireland in 2017 and, along the way, gathering plaudits for his performance on Kilkenny counterpart Adrian Mullen in the semi-final.

Having got his championship debut last year in the helter-skelter defeat by Dublin that ended Galway’s championship, he has kicked on with some excellent displays in the league.

One hurler who looked on track to graduate last year was Fintan Burke, a forceful but flexible defender and the county’s last under-21 captain (before the grade was abolished in 2019) but a ghastly knee injury in St Thomas’s All-Ireland club final defeat put paid to that.

He has returned at times gingerly from the experience but has been getting back to his best.

Evan Niland’s free-taking haul (0-13 out of his 14 points) was key to beating Tipperary last week – especially in the first half against the wind – and compensated for the absence of the injured Joe Canning, who in the early part of the season has been in great shape and good form.

Beating Tipperary represented a 16-point turnaround and if the All-Ireland champions may not have been at full tilt, Galway could equally point at the players they were missing - multi-decorated All Stars like Canning and Daithí Burke, as well as the managed return of David Burke, who supplemented his half an hour against Cork with another quarter last Sunday.

But there is the sense that O’Neill knows what the established players can do and needs to determine the identities of the next wave.

It was noticeable that Micheál Donoghue’s team didn’t change much after the 2017 All-Ireland and 14 of the 15 lined out in the following year’s final. There was young talent and he gave them chances but they weren’t ready.

A major advantage for O’Neill came, according to Hayes, in the redrawing of the league because unlike Galway’s strange permanent residency outside of the top tier during Donoghue’s time – even when emphatically winning the competition in 2017 – this year, the young pretenders got to play top opposition.

“Evan Niland was there last Sunday, having to mark Pádraic Maher at centre back. Where are you going to get a better test of a player than one of the best centre backs in the country?”

We may be embarking on a time of anxious uncertainty but when, as is the fervent hope of us all, normality returns, Galway will be ready to go.