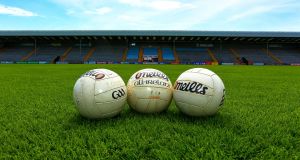 A convincing 10-point winning margin in the end but Castletown had to turn on the style to end a nine-year barren spell with a dramatic victory over Gusserane O’Rahilly’s in what was a thrilling Wexford senior football championship final at Innovate Wexford Park on Sunday.

Inspired by the experienced James Holmes who gave a towering attacking display, Castletown had a storming start when a Holmes inspired move saw Brendan Halpin score a goal inside 30 seconds of the start, giving them a lead they never subsequently relinquished.

They led 1-4 to 0-2 at the end of the opening quarter, extending that to 1-7 to 0-2 by the 22nd minute when Gusserane had a Sam Wall goal disallowed for a square infringement, and in a quick counter attack from the resulting free, Jonathan Bealin blazed home a superb goal helping his side to a 2-8 to 1-6 lead at the interval, an Adrian Flynn goal minutes before the break hauling Gusserane back into contention.

When Castletown extended the lead with three unanswered points through James Holmes, Jonathan Bealin and Donnchada Holmes within six minutes of the restart, they looked on their way to a comfortable victory, but Gusserane kept battling and a 44th minute Gavin Sheehan goal reduced the deficit to four points, 2-12 to 2-8.

Gusserane never led in the game and it was always Castletown who were going to finish strongly with sub Robbie Brooks scoring a superb third goal five minutes from the end to seal a dramatic victory and end that long barren spell without a county title.