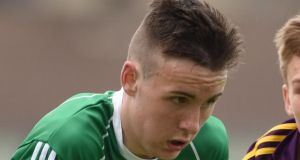 Cian Johnson scored two goals in the second half to help Ferbane to their first Offaly SFC title since 1994. Photograph: Tom Beary/Inpho

A spectacular second-half performance by Cian Johnson saw Ferbane end their long famine when they captured the Offaly senior football title in Tullamore.

Johnson struck for two superb goals after the interval as Ferbane wrestled victory from the jaws of defeat to win their first title since 1994.

It was a stunning win for Ferbane, who struggled to find their A game in the first half and trailed by 0-8 to 0-6 at half-time.

Rhode were missing star attacker Niall McNamee, who only came in as a late sub having sustained a heavy blow to the head in their semi-final win and his loss proved to be a grievous one.

Rhode went 0-11 to 0-6 up early in the second half but Johnson’s first goal in the 41st minute changed the complexion of the game. He got a stunning goal four minutes later as Ferbane went 2-9 to 0-11 up and had enough in the tank to hold off a late Rhode rally.