Tyrone’s McShane ruled out for rest of the season 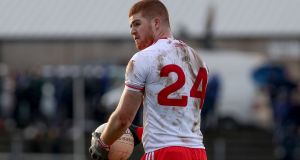 Cathal McShane: his hopes to play a role for Tyrone in the championship have been dashed due to an injury complication. Photograph: Bryan Keane/Inpho

Tyrone’s All Star full forward Cathal McShane has suffered a setback in his recovery from a serious ankle injury, and is set to miss the remainder of the season.

McShane sustained the injury during the NFL clash with Galway at Tuam back in February, and was expected to be sidelined for his side’s Ulster Championship first round meeting with Donegal.

But the Covid-19 pandemic helped him buy time, and recovery and rehabilitation during lockdown opened up new possibilities for the Owen Roes clubman.

Such was his progress that he expressed confidence just weeks ago that he would be fit for the new date for the provincial series opener in October.

However, his rehabilitation has not gone as well as hoped, and he will not play again this season.

McShane tweeted at the weekend: “‘Behind every setback is an opportunity’. 2020 has been frustrating year for sure however always staying positive! I will be doing everything possible to make sure I come back stronger.”

A club source confirmed that McShane has not been able to train or play with Owen Roes since football resumed last month.

The source added that he underwent a further operation last week to rectify a recurring issue, and is expected to be out of action for the remainder of the year.

The 24-year-old suffered the injury just weeks after turning down an offer of an Aussie Rules contract with Adelaide Crows.

It was a rare and complicated dislocation that required surgery, after he landed awkwardly on a heavy sod at Tuam Stadium.

His injury capped a miserable day for the Red Hands as they slumped to the heaviest defeat of manager Mickey Harte’s 17-year tenure.

McShane was the Championship’s top scorer in 2019 after making a sensationally successful move to full forward, striking up a potent partnership with Mattie Donnelly, who is also on the way back from serious injury.

The setback involving McShane is the latest in a string of worrying developments which have seen a number of Tyrone players, including Frank Burns, Padraig Hampsey and Ronan O’Neill, suffer injuries in club games in recent weeks.