Tipp can top Armagh once again, while Monaghan hold the aces over Carlow

All-Ireland qualifier previews: round 3B 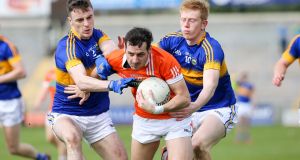 As the clock ticks down in July, the qualifiers become more and more competitive with teams beginning to sense their route to the quarter-finals. As has been pointed out for most of the week, these counties already have a dramatic encounter behind them from the league match that decided promotion to Division Two.

In the way of such things, the county that came out on top in the division, Louth, have long departed this year’s championship leaving this pair still going.

Michael Quinlivan, whose injury-time goal got Tipp onto the promotion ladder, has returned from injury and again sits on the bench but should be on the field for any late heroics that may be required.

Tipperary could be forgiven for wishing that all of their matches could be played in Ulster. Last week’s great second-half recovery against Cavan in Kingspan Breffni Park came nearly a year after the one-point win over Derry in the same venue and the late league eclipse of Armagh was in the Athletic Grounds.

Armagh have been rebuilding since losing to Down. The wins over Fermanagh and Westmeath were signs that the young team is picking up momentum. They managed last week without Jamie Clarke, gone to an early black card, and have him back for this and Kieran McGeeney has also made his return to the sideline after suspension.

His counterpart Liam Kearns has endured a year of injuries and withdrawals to test the patience of Job. It has been remarkable in the circumstances that he has guided the team to promotion and scalped a side playing Division One this spring.

With Quinlivan available and Philip Austin back in harness, Tipp have the starting attack from last year’s All-Ireland semi-final at their disposal, and a terrific comeback win under their belt, as well as a home advantage.

Armagh have also been operating well in the face of adversity. Aside from Clarke’s black card, which removed him for virtually the entire match, they lost James Morgan to another after 20 minutes and his replacement Gregory McCabe to a red at the end of the third quarter. They still had enough composure and crucially sufficient reserves on the bench to break Westmeath with 1-2 in injury-time with the match level and apparently heading for extra time.

This promises to be a tightly contested match but there is something vibrant about Tipperary at the moment particularly with the tide of injuries turning and they deserve to be marginal favourites.

It’s been a great summer for Carlow so far and this weekend, they officially outlast the team of five years ago that reached the Leinster semi-final only to lose narrowly to Antrim in the qualifiers.

This summer’s spirited tilt at Dublin wasn’t followed by the trickiest of draws, against London and Leitrim, but Turlough O’Brien’s team have been in good form and will have Brendan Murphy back from suspension for this latest test, which sees the ramp being elevated significantly.

Monaghan haven’t always taken well to the qualifiers, as last year’s defeat by Longford illustrated but there is a chance that this year’s championship setback against Down was one of those days when everything went against them.

For example, only minutes into the second half and after making no secret of his frustration at not taking a 45, which was then missed, Monaghan ’keeper Rory Beggan mishit a re-start that ended up as a penalty for Down, which they converted.

Having endured all of that, the team were still within range at the end but Jack McCarron missed a chance to equalise and Down went to the other end to make the winning margin two.

Any idea that this might signal Monaghan as being on the slide was firmly put to bed with their high-scoring dispatch of Wexford a week ago.

Another trip to the south-east shouldn’t hold to many fears for them now that they’ve got back on track.

Carlow will be buoyed by Murphy’s return, as they struggled at times at centrefield but with him restored, it will allow Seán Murphy concentrate on his running game, which was so effective against Dublin.

They may choose to replicate the fortress defence deployed in the Dublin match even though it merely delays the inevitable as respectably as possible. Monaghan’s physicality and practised ability to play that sort of game would eventually wear them down and Malachy O’Rourke’s team have been ruthless in putting away teams once they flag towards the end.

Five matches is as long a summer programme as Carlow have had since the 1940s but it looks like ending here.