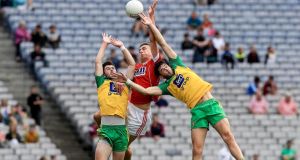 Mark Collins of Cork challenges for the ball with with Ryan McHugh and Odhran Mac Niallais of Donegal during the All-Ireland Senior Football Championship Round 4B Qualifier at Croke Park. Photograph: Donall Farmer/Inpho

When it comes time to write the obits for this Donegal team, we shouldn’t be miserly with our words. At their best, they were thrilling and boundary-breaking and mad, mad enjoyable. But if a good measure of a side is what they bring on the days when they’re not just right at it, we ought to recall that there weren’t many for them to bow down to.

They turned up in Croke Park on Saturday looking like they weren’t overly sure if this was worth all the hassle any more. For the opening 20 minutes, they had the bearing of students on their last day of school.

They were loose and lax at the back and, Patrick McBrearty excepted, wan and unobtrusive in attack.

When Cork went 1-6 0-4 ahead through Paul Kerrigan’s goal on 17 minutes, you wouldn’t have had many takers for Donegal roaring back into it. They outscored Cork by 0-17 to 0-9 over the remaining hour and blazed through to their sixth All-Ireland quarter-final in a row.

For an idea of the scale of such an achievement, only three teams have bettered it since the inception of quarter-finals in 2001. Kerry have been in all 16, Dublin have been in every one since 2004, Cork made it to 10 in a row between 2005 and 2014. But that’s it. That’s the list. No Ulster team has ever made six quarter-finals on the bounce and the current Mayo side are on the same run, having made the last eight every year since 2011.

This is not a simple task, ever. It wasn’t on Saturday when a Cork side that looked to have found its mojo passing through the Red Cow roundabout put it up to them. Their response was stirring. McBrearty had a day of days, finishing with 0-11, 0-7 from play. Ryan McHugh and Eoin McHugh brought energy and class throughout. Older players like Frank McGlynn and Michael Murphy kept chugging on even though they weren’t being powered by the purest fuel. Experience and personality got them through. Again.

“There’s tons of it in our boys,” said Rory Gallagher afterwards. “Sometimes they don’t feel they get enough awareness of that. They’ve serious pride in themselves. They dig things out. Very seldom that they’re beaten, that they throw in the towel. It would have been easy maybe, five points down, to do that. But they dug in. I thought they showed great character.”

Donegal have been here before and they started to play like it after Kerrigan’s goal. McBrearty was untouchable throughout but he really kicked into gear over the course of the rest of the half. He was having one of those days where all Donegal had to do was feed him enough ball and the scoreboard would tick dutifully along.

By half-time, he had seven points scored from seven shots taken. He kicked a wide early in the second half – we looked at the sky half-expecting him to be hit by lightning. More or less single-handed, he hauled Donegal back into it and they went in at the break just 1-9 to 0-11 behind.

It was a terrific game by now and Cork deserved full credit for their part in it. For all the criticism they’ve received this summer, they showed they didn’t lack players or gumption. Kevin O’Driscoll kicked two fine points from wing-back, Donncha O’Connor a couple of his own. Aidan Walsh came off the bench to land a monster from out on the right, Mark Collins kicked a sweet one too.

But Donegal had their stars as well. Ryan McHugh was everywhere; Eoin McHugh wasn’t far behind. When Odhrán MacNiallais found his range with a customary languid score from distance on 46 minutes to make it 1-12 to 0-15, it was anyone’s guess where the game would end up.

Cork kicked the next two points through Tomás Clancy and a Colm O’Neill free but from that point on, they withered. They started kicking wides that hadn’t been in their make-up before – Walsh, Kerrigan and Colm O’Neill were guilty parties who ought to have had more settled heads. Eight of the Cork starting team were making their first championship appearance in Croke Park; they could reasonably have expected better from their elders.

At the other end, Donegal played smart and played strong. Murphy had been quiet all day but he popped up with a free, McBrearty continued punishing every slip in the Cork defence. Gradually, they pulled away, outscoring Cork by 0-6 to 0-1 in the closing 20 minutes.

So on they go, with a date against Dublin next Saturday. There will be many in the city who feel they are owed for 2014 and plenty in the game who’d like to see them bounced for all that has come and gone since they met in 2011.

But for all the rocks that get thrown their way, Donegal keep rolling. Pity the poor souls who can’t see something to admire in that.