Sigerson Cup: Sligo IT edge past fancied Queens after extra-time 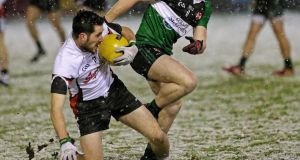 Four unanswered points in the second half of extra time helped Sligo IT beat Queen’s University in last night’s preliminary round Sigerson Cup tie at the Dub.

Queen’s were left to rue a penalty miss in the first half of extra time, after the sides had finished level at 0-7 to 1-4 at the end of normal time amidst snowy conditions in Belfast.

No doubt inter-county managers hoping for the safe return of their players ahead of the start of the Allianz Leagues this weekend will have been unhappy that this fixture went ahead.

Underfoot conditions were treacherous and snow blizzards made aspects of the game a complete lottery.

One player on each side did all the scoring in the first half, Mayo’s Evan Regan hitting 1-2 for the visitors and Armagh’s Ciarán O’Hanlon hitting some superb scores for Queen’s, who trailed by 1-2 to 0-4 at the break.

Queen’s had full-forward Caolan Daly (Tyrone) harshly black-carded after two minutes and Sligo made a bright start, Regan scoring a free and then reacting quickest to fist home a goal after just four minutes.

Ryan Murray’s free levelled the scores for Queen’s early in the second half and their goalkeeper Mickey Cunningham made a smart save from Regan.

Another long-range score from O’Hanlon put Queen’s ahead for the first time after 44 minutes.

He added another point to stretch Queen’s lead to 0-7 to 1-2 as conditions improved, before Regan got Sligo’s first score in 25 minutes with a 50th minute free.

Cathal Mulryne landed the equaliser with Sligo’s first point from play after 53 minutes to take the game to extra time.

Both sides added a point but Queen’s missed a penalty in the ninth minute of extra time when Ryan Murray’s shot crashed off the post, leaving the sides locked together at 0-8 to 1-5 at the interval.

Queen’s regretted their penalty miss when Sligo scored three unanswered points in the second half of extra time, including a free and a point from Daniel McKenna.