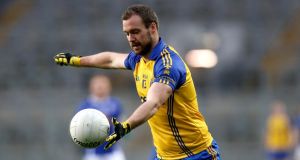 Senan Kilbride has scored 3-35 in 14 starts for his county Roscommon – all but 0-10 of it from play. Photograph: Ryan Byrne/Inpho.

Senan Kilbride is early. You walk in and there he is, head stuck in a neatly-lined notebook of red and blue writing. Cast him in stone and it wouldn’t take much imagination to name the sculpture: A Student, Cramming.

“Irish oral tomorrow,” he says, his head nodding to St Patrick’s teacher training college a few hundred yards down the street in Drumcondra.

“How are you fixed?”

“Ah grand. A few stock phrases and then move the conversation around to Roscommon football.”

Old school, then. This is his second go-round at college. The first was a wash-out few years in NUIG straight after his Leaving Cert a decade ago. Life In The Big Bad World, with Commerce and German growing more and more optional as the semesters passed.

Own routine
“I wasn’t looking after myself at all,” he remembers. “I’d say it happens to a lot of young lads – they go to college and they have to cook for themselves and mind themselves and try to set up their own routine. I ended up with glandular fever.”

So here he is, a week short of his 29th birthday, knuckling down for the Scrúdú Béil as he nears the end of his time in St Patrick’s. If he seems a bit long in the tooth for it, well maybe it’s apt in a way. Nothing has come quickly for Senan Kilbride.

The one thing that came easy was a talent for splitting the posts but even that hasn’t been the golden ticket it promised. His underage years for Roscommon fell just before they became the Connacht gold standard at minor and under-21. He made his senior debut in the league in 2005 but between injury and illness it was three full seasons before he played a championship game.

Time passed, the future hiccoughed along. Tomorrow will be six years to the day since his championship debut against Galway and so far he’s played just 15 summer games. He’s only been on a winning team five times – twice against Leitrim and one each against New York, Wexford and Armagh.

The one year Roscommon went on a run and lifted the Connacht title in 2010, he spent the whole season watching on from the sideline as he recovered from a bout of osteitis pubis. If they’d beaten Cork in the All-Ireland quarter-final that year, he’d have been very close to making it back for the semi-final.

‘Tough one’
“That was a tough one,” he says. “You try but you just don’t feel as much a part of it. I was sitting on the sideline the day of the Connacht final with Mark O’Carroll who had broken his leg that year against London. And we couldn’t be as ecstatic as the guys who were running onto the field. It’s not as easy. You definitely don’t feel a part of it as much.

“You’re obviously delighted to that at the end of the year, you get a medal for being part of the squad. But then you have to go back to the club. I was lucky in that the club started to hit a run of form that year and we ended that season in the All-Ireland final.”

The club is the mighty St Brigid’s of course, winners of seven of the last nine county championships in Roscommon, four Connacht titles and last year’s All-Ireland. To say the success hasn’t transferred to the county team would be low-balling it in the extreme.

Kilbride grew up watching clubs like Éire Óg in Carlow bulldoze all before them and heap Leinster titles high. But when it came to the summer, Carlow’s duty had all ended before the evenings shortened. He could never work it out.

“Them and St Gall’s in Antrim. You’d watch them and they’d be serious club teams playing really good football. And then it would get to the summer and you’d be going, ‘What’s the story with the county team? Why can’t they just translate it?’

“I used to think that even if you just picked a rake of lads from that club and put them in, surely it would get them somewhere. But that’s not how it works at all. The jump from club to county is extreme.”

In Roscommon, there’s no shortage of takers for the contention that Kilbride has found the incline a bit too steep at times himself. It’s probably unfair if you look at the bare numbers. In 14 starts and one five-minute sub appearance at the end of last year’s qualifier against Tyrone, Kilbride has scored 3-35 – all but 0-10 of it from play.

Those five minutes against Tyrone aside, he’s only ever failed to score in one game, the 2009 replay win over Wexford. Otherwise, he’s paid his way. But it’s not shoot-the-lights-out stuff either, which is what people are used to seeing him provide in a Brigid’s jersey. They’re often not shy about making him aware of it either.

‘Not determined’
“Everyone knows it’s so much harder to get the scores at county level than with the club. A corner-forward at intercounty might only get two points in a game but their value is not determined by how many scores they get.

“Nowadays it’s more about what they’re doing for their team. Are they winning ball? Are they bringing team-mates into play? Are they fitting into the system in the right way? It’s different with the club because you’re there to get the scores. The game is more open and you’re going to get more chances.”

On the whole though, people recognise that. If there was a time when the wider hopes of a Roscommon breakthrough hung on the Brigid’s lads carrying their form, that focus has shifted onto the talent that has been bubbling up at underage. Three of the last five Connacht under-21 titles, as well as three Connacht minor crowns and the 2006 All-Ireland at that level all point to a future that will surely soon see a sunrise. It will be unforgiveable if they let the moment pass.

“Ideally, your senior team would be going well and there’d be a constant conveyor belt underneath with two or three lads adding to the senior panel each year. But it hasn’t worked out that way for us. The senior team hasn’t been going well. We didn’t win a championship match last year. It’s not good enough.”

The main thing Kilbride has noticed is that youth brings the bliss of ignorance.

“They’re coming into a senior set-up and there are lads there who could be playing for a decade and they might only have won a handful of championship games in their whole career. They might be looking at us and going, ‘These boys just don’t know how to win’.

“They have supreme confidence in their own abilities and they are using it to push us every bit of the way. I look at them and they don’t let anything knock them back. I’m kind of learning off them that way.”

1 Cian Healy: ‘Realistically I got away with murder when I was younger’
2 Robbie Henshaw likely to be the only Irish change for France finale
3 Rovers boss Bradley outlines Jack Byrne’s struggle with coronavirus
4 Bartomeu resigns and drops bombshell of Barcelona joining European Super League
5 Ireland's centre will hold thanks to Henshaw and Aki’s midfield muscle memory
Real news has value SUBSCRIBE