Running the rule over the GAA’s new football rules

‘Feedback from players would have been mostly negative and frustrated’ 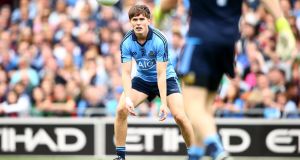 All kickouts must cross the 45 under the proposed new rules. Photograph: Cathal Noonan/Inpho

On a clear and mild Thursday night in the middle of October, three freshers football teams went out to the GAA pitch in Abbotstown and tried out some small steps for man. Maynooth University, DIT and Trinity all sent along teams and at the behest of the Standing Committee on Playing Rules, they played three 20-minute matches incorporating the five newly proposed football rules.

Around the same week, Colm O’Rourke’s school St Pat’s Navan played two internal games under the new rules and another against St Pat’s Cavan. While the committee took soundings from all over the country, ultimately they needed to see the rules in action in full-blooded games. Or as full-blooded as you can be when you’re trying the football equivalent of brushing your teeth with your left hand.

“I don’t know how the problems of the game can be solved,” says O’Rourke. “Feedback from players would have been mostly negative and frustrated, to be honest,” says Aidan Minnock, who took the Maynooth team on the night. “The players didn’t find it enjoyable, very frustrating,” says Stephen O’Meara, coach of the DIT team.

For a sense of how things worked - or didn’t work - it’s probably as well to go through the rules one by one. The sin-bin proposal didn’t come into effect at any stage and will go to the committee in its original form. The rule that all sideline balls must be kicked forward will stay in its original form too, although the college coaches immediately saw what they felt was an obvious flaw in it.

“It just encourages the other team to put everyone behind the ball,” says O’Meara. “If you can’t go backwards with the ball, why wouldn’t the other team just overload the patch of the field you can see in front of you? Straight away, they’re favourite to create the turnover.”

“You’re giving the advantage to a defensive team and actually encouraging them to be more defensive,” says Minnock. “That’s what we found on the night. Personally, I didn’t see a lot wrong with kicking a ball sideways or backwards because the reason you’d be doing it is to open up the play. With this, you’re going to be kicking the ball down into channels that are crowded with defenders and the defenders have the advantage.”

By contrast, the only change O’Rourke would have made would be to extend the imperative to kick the ball forward from all free-kicks, not just sidelines. “That would have a bigger impact than sideline kicks because there’d be far more of them,” he says. “I don’t know if it’s going to have a big impact with just the sidelines.”

The other rule that will go forward in its original form is what many will see as the biggest change of all, reducing allowable handpass chains to no more than three handpasses before a kick is required. Of all the rules, this was the one that changed the dynamics of the interplay and the one that was most whistled by referees.

“You got blown mostly in attack,” says Minnock. “You’d often be in a situation in attack where the lads would put a good move together, one, two, three handpasses and it would be the fourth one that was about to create the scoring chance and you’d get whistled for it.

“The blanket is there, regardless. That’s how players have been coached, that’s what the game has become. The handpasses are there because of the blanket, not the other way around. You’re trying to counter defensive football and the way to do it is quick movement, a build-up of handpasses and then a runner off the shoulder. The instinct is there from players to give that pop pass. That’s what was blown mostly.”

In their press release this week, the committee spelled out that the trial games were important mostly so that they could get a feel for unintended consequences. According to each of the coaches, the upshot of reducing handpassing was actually to make the game more defensive rather than to open it up.

“All that happened was that by the time they got to two handpasses, players were automatically being cautious and kicking a backwards pass,” says O’Meara. “It actually slowed the game down.

“Footballers now are percentage players and that’s their instinct when they’re in possession. So that’s why we saw in the trial games a situation where players would turn around and kick the ball backwards after two handpasses instead of risking kicking it forwards. Fellas aren’t going to hoof the ball 50 yards just because their three handpasses are up. That’s gone.”

O’Rourke, who is broadly more positive on the proposed changes than the college coaches, nonetheless accepts that the dominant mindset of a possession-based game won’t be changed at a stroke by them.

“I don’t know how effective the handpass rule will be,” he says. “From the look of it, players will take three handpasses around the middle of the field and then turn around and kick backwards. It’s not going to cause people to kick forward.”

As for the other two proposals, they will land on Central Council’s desk next week fundamentally altered from their original guise. The offensive mark didn’t arise, partly as a result of gun-shy players not wanting to be the one to turn the ball over by launching balls in but partly too because referees found it difficult to say for sure whether players were inside the 20 or not. As a result, the new proposal has a mark being available to players taking a clean catch inside the 45 from balls kicked more than 20 metres.

But it was the kick-out rule that fell hardest by the wayside. In all games played, it was apparent very quickly that the idea of making everyone set up in their positions again for each kick-out, leaving only two players from each side between the 45s, was going to be unworkable.

“It was a mess,” says O’Rourke. “It couldn’t be enforced and there were all sorts of anomalies that became clear straight away. Like if a defender was caught up the field, he wouldn’t be able to run back because the goalie could kick it out quickly and catch him in the zone between the 45s and get a free for it. The intention was good, the practicalities of it just didn’t work.”

“It didn’t work from the off,” says O’Meara. “They actually abandoned it after the first or second third. It was gone by the last one. It slowed everything down so much and it meant goalkeepers were waiting around for ages to restart the game.

“The least you’d need for it to work would be a time constraint whereby everyone had to be back in place within 20 seconds or whatever or give up a free. But then you’re into needing a second referee at least. So it was during the game actually that they abandoned it and just said instead that the kick-outs have to go beyond the 45.”

Since those games, the committee gave the kick-out rule a full overhaul. The new proposal is simply that each kick-out will be taken from the 20-metre line and must pass the 45. In and of itself, it will be a radical change if it comes in. But much less radical than what was originally conceived.

“One thing I noticed was that the quick kick-out is gone now,” says Minnock. “That was a part of the game that tended to speed things up but it won’t happen now. It certainly wouldn’t have happened under the proposed rules that we played that night because the goalkeepers had to wait for players to get back into position. But even the requirement to kick it out past the 45 means goalkeepers will take that bit longer with it because it’s a more high-risk kick.”

Changes come, changes go. Whatever successes or failures the committee have next week, let nobody say they didn’t give it their best shot.

Rules changes proposed by the Standing Committee on Playing Rules

Proposal 1: A restriction of three consecutive handpasses by a team in possession.

Proposal 2: All sideline kicks to be played forward.

Proposal 3: A clean catch inside the 45 from a ball kicked more than 20 metres in open play awarded with a mark.

Proposal 4: Black card infractions to be penalised with 10 minutes in the sin-bin.

Proposal 5: Kick-outs to be taken from the 20-metre line and must pass the 45 or be intercepted by an opposition player before a defending player can touch the ball.

4 Johnny Sexton circles the wagons and insists Ireland are improving