League leaders win by 13 points after dominant second half performance 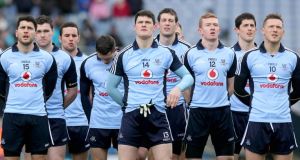 Long way to go and all that but nobody's nick can lay claim to a better look just now than Dublin's. Four games in and nobody has scored more or conceded less in Division One. They're the only team in the top three divisions of the Allianz League to have won all their games, each of them by an average margin of just a hair above eight points. All this while giving playing time to 30 players, none of whom are Alan Brogan or Kevin Nolan and none of whom play for All Ireland club finalists Ballymun.

They smoked Kildare here, holding their own into a stiff first-half wind and wiping Kieran McGeeney's side out in double quick time after the break. Jim Gavin's search for fresh lego bricks is continuing smoothly, with the likes of Jonny Cooper and Jack McCaffrey clicking eye-catchingly into place in defence and Ciarán Kilkenny looking to the manor born in attack. The 15,389 souls who tried frostbite on for size at Croker went away assured of a lengthy summer ahead.

"It's progressing well," agreed Gavin afterwards. "This weekend marked the third month that we are with them. There are a lot of new concepts of play that they have to buy into and understand. It's a work in progress, every session we do with them is a work in progress."

With every passing game, Dublin show off more evidence of both work and progress. Kildare offered them a puzzle they hadn't had to solve yet in the opening period, dropping an iron curtain across their half back line and offering Dublin no comfortable route to goal. It was a tactic that worked fairly well for what it was, restricting Dublin to pot-shots and long passes that went out over the endline.

But though the object of the exercise was achieved - the sides were level at 1-3 to 0-6 after 21 minutes - you couldn't help but feel it was the wrong exercise. Kildare had the wind at their backs and needed to build a score. As it was, they owed their goal to a howler from Dublin goalkeeper Shane Supple who came to punch a high ball and got baulked by a combination of Tomás O'Connor and the otherwise excellent Rory O'Carroll. Seanie Johnston dived on the loose ball to palm home his second goal in two games.

Instead of Kildare kicking on from there, Dublin outscored them 0-5 to

0-3 for the rest of the half. Diarmuid Connolly knifed a couple of shapely points and Kilkenny scored a silly one when he caught a shot of his own that got held up in the wind and came back to him. It meant that Kildare went in 1-6 to 0-11 behind when the conditions surely called for them to take a lead of some sort to their tea.

Dublin charged them a hefty tariff for it. Kevin McManamon came off the bench at half time and clipped two smart points inside the first

55 seconds of the restart. A minute later he sent Paul Flynn in for one and although Shane Connolly pulled off a fine save from Bernard Brogan soon after, Kildare were listing.

And Dublin were only too happy to sink them. McCaffrey and Kilkenny threw over points of their own to put them seven clear before McCaffrey polished them off by slotting a lovely goal on 46 minutes.

The Kildare midfield was getting pulverised at this point and when Paul Flynn robbed possession for the umpteenth time and sent Kilkenny away, the red lights were flashing immediately. Kilkenny fed Connolly whose slick transfer put McCaffrey in on goal.

No panic, no mistake. Dublin 1-16 Kildare 1-6. It left 25 minutes on the clock but no game with which to fill them. Everything that came after was form-filling and checklist-ticking. Kildare managed a goal and a point in the whole of the second half and after a mostly frustrating day, Bernard Brogan got his goal in the end.

They couldn't because Dublin were ruthless and pacy, savage in the hunt and smart in the use. There's a long way to go, it's true. But be in no doubt that they're going a long way.