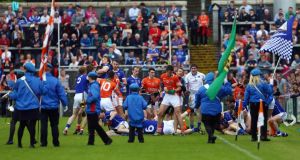 Members of the band look on as Armagh and Cavan players clash before the start of the Ulster SFC quarter-final at the Athletic grounds. Photograph: William Cherry/Inpho/Presseye

Armagh 1-12 Cavan 0-9: Armagh defeated Cavan in a tempestuous Ulster SFC quarter-final in the Athletic Grounds but the game was marred by disgraceful scenes during the pre-match parade which left Cavan full forward Martin Dunne unable to play in the game.

Dunne, who scored eight points from play in Cavan’s victory over Armagh last year, sustained a suspected shoulder/arm injury during the brawl which involved almost every starting player on both teams.

Referee Marty Duffy took no action but Armagh defender Brendan Donaghy had to receive treatment for a cut above his eye before the game started while Dunne had to be replaced in the starting 15 by Jack Brady.

Armagh were well organised defensively and were the dominant side in a poor first half.

They kicked 11 wides in the opening period and should have led by a lot more than 0-5 to 0-2 at the break.

All but one of the first-half scores came from frees. The one point that was scored from play by Jamie Clarke came after a free rebounded off the post.

Cian Mackey was unable to start through injury and he was another huge blow to Cavan’s game-plan.

They scored the first two points of the game from frees by Eugene Keating in the opening seven minutes but failed to score again until the 45th minute.

In between times, Armagh scored eight points in a row.

Cavan rallied briefly with three points in a row, David Givney with two of them, to reduce the deficit to 0-9 to 0-6 but a goal by Caolan Rafferty after 52 minutes ensured victory for Armagh.

Both sides missed a number of goal chances and the game was littered by poor shooting and turnovers.

Armagh were comfortably the better side, however, and Aaron Kernan came off the bench to score three points.

Cavan had James McEnroe and Robert Maloney-Derham black carded late on while Armagh’s Ethan Rafferty was sent off after picking up a yellow followed by a red.