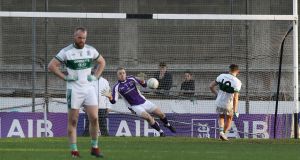 Kilmacud’s David Nestor saves a penalty from Craig Rogers of Portlaoise that would have drawn the game. Photograph: Lorraine O’Sullivan/Inpho

Portlaoise players must have been shaking their heads after Sunday’s AIB Leinster football semi-final. They never led this match and in truth at times, the Dublin champions with their pace and movement looked on the verge of - appropriately enough - running away with it but their Laois opponents showed great composure and a range of different weaponry to take this match to the brink.

Before a meagre crowd of about 1,200 it was a great contest with both teams going all out and putting up an impressive 37-point game between them but the greatest drama was saved nearly until the final curtain.

In injury time, with Crokes three ahead, replacement Scott Lawless was fouled as a high ball dropped in on the Crokes’ goalmouth. Goalkeeper David Nestor gathered safely but referee David Coldrick awarded the penalty.

Craig Rogers, another replacement, who had finished confidently for Portlaoise’s third goal, took the kick and hit it to the left of Nestor but the ‘keeper pulled off a great save at the cost of 45. The chance was gone and just as three years previously when a simple free would have drawn with Ballyboden, they ended up letting Dublin champions off the hook.

Nestor - all of 33 - was self-deprecating in his analysis of the save.

“Look, I suppose at my age going left isn’t really an option so that I went right early. That was lucky but look, it would have been a drawn game and we would have put the ball back on the tee and gone again; there was still a minute or two left. You don’t deviate from the process.”

Had Portlaoise forced extra time it would have been slightly incongruous as they never led the match at any stage and had been on even terms for just a couple of minutes but any time Kilmacud looked like dominating, the match was hauled back into contention.

The winners’ Dublin duo of Paul Mannion and Cian O’Sullivan had subdued matches. O’Sullivan in particular looked distracted and turned over possession a few times, including in the lead-up to Paul Cahillane’s goal, whereas Mannion was well shadowed by David Seale - very much performing in his task of restricting the prolific All Star.

Curiously it was goal scoring that kept Portlaoise in business. Crokes had conceded just one goal in the championship to date and that back in April but this time out, they were surprisingly porous. Had Nestor not stopped the penalty - and he had earlier denied Kieran Lillis a goal - his team would have shipped four in an hour.

Portlaoise play orthodox football and had a dependable platform at centrefield where Ciarán McEvoy was excellent, partnering Lillis. They also picked out excellent foot passes when they moved forward.

The pressure cam on immediately, as within three minutes Dara Mullin skinned the defence when cutting right through the middle before dummying his way past ‘keeper Graham Brody for the opening goal.

Gareth Dillon replied quickly for Portlaoise, following up on his own shot being blocked, in the fifth minute but as would be the recurrent trend Kilmacud replied with a scoring blast, on this occasion the lively Callum Pearson, Pat Burke, Mannion after a fine counter-attack by Cian O’Connor and Craig Dias on the end of another well-built move from the back all combining to stretch the lead to five in as many minutes.

The margin still stood at five when Cahillane exploited defensive uncertainty to swerve the ball into the net and reduce the margin to 1-7 to 2-2.

It was sufficient credit to keep the Laois side afloat even though when Brody came up to kick a couple of 45s both went wide but in mitigation thwarted Mullin, who was through on goal again in the 24th minute. Crokes though missed other chances - Shane Horan hitting the post and Seale robbing the ball off Mannion.

The half-time lead of three, 1-11 to 2-5, looked thin for Crokes and Portlaoise kept coming in the second half. Rogers’s 47th-minute goal levelled the match at 1-14 to 3-8 but they wouldn’t score again whereas frees from the customarily hard working Burke and Mannion plus a terrific score after a rocketing run from the back by Andrew McGowan built the winning margin.

Manager Jonny Magee was relieved but content: “This is what Leinster football is all about - it’s about being tested. There’s only so much you can do as a coach or manager to prepare lads for those last five minutes. The lads stood up today.”

They won’t be the romantic pick in the final when for the first time a Longford club will contest the title and, as estimated by broadcaster Oisín Langan, they will be a club with a membership 10 times the size of their opponents’ population.