Joanne O’Riordan: In Weeshie’s world everyone was extraordinary 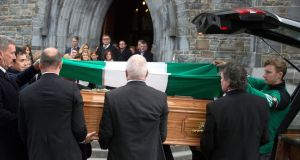 It was early 2015 when my father received a phone call asking me to speak at an event in Killarney.

By that stage, I was a few months into my new course in UCC and getting accustomed to life away from my family and trying to be an average student. I hummed and hawed over it, and my Dad told me it was an event for the Killarney Legion GAA football team.

“No, but we’ll see what they are about at least”.

I had always wanted to do a GAA social talk, but, as an 18-year-old student who thought she was above everything, I wanted to do it for trophy winners and the like.

We arrived at that social and I had the formalities to go through, general introductions and the like and then I heard an all to familiar voice. It was Weeshie Fogarty.

Weeshie had done a sit-down interview with me for Terrace Talk. I have done countless interviews in my life, I’ve been asked the same questions a ridiculous amount of times, but this interview with Weeshie was different.

Aside from the fact he was the only man at an all women’s event for Killarney Golf Club, his whole aura was different. He was charming, eloquent, a master of the English language and so knowledgeable about every topic.

From discussing sex offenders to the behind-the-scenes reality of the Kerry dressing room, an interview that was supposed to be 15 minutes took the guts of half an hour. I found it outrageously hard to leave Weeshie to do my talk, not just out of obligation to talk sports with the only man among 150 women, but I didn’t want to leave Weeshie.

I obviously did not want to leave him because of the fantastic conversation we were having, from his time as a psychiatric nurse to his days as a footballer and a referee, from the wheelchair section in various stadiums to my sheer desire to be, in a way, like him.

I knew I couldn’t be Weeshie, I wasn’t as eloquent as he was and I was nowhere near as brainy and knowledgeable as he was. But I was inspired by the way his voice could transcend from place to place, generation from generation. Everybody, and I literally mean everybody, had a story about Weeshie.

Whether it had a personal touch of when they met him, or whether it was from listening to his stories or his talk show, every one of had been impacted by Weeshie Fogarty

Before my talk, Weeshie did my introduction and, to be honest, I may as well have left the social because he spoke about me, my life and everything I had done in a way I could never top.

After I spoke, he handed me life membership of the Killarney Legion club. Many people ask me why the Legion and was it James O’ Donoghue who persuaded me, but really, there was only one man who could have convinced me, and that was Weeshie . . . no offence to the others.

The following year, I learned of his Hall of Fame award and the recognition that man truly deserved. Of course, he had to be honoured at the next Legion social, but there was one act of kindness I will never forget. After the Legion chairman and I handed him his coveted and deserved award and after Weeshie told a few stories to get the crowd laughing, he turned to me to place the award on my tray.

I sort of glared at it, truly in awe and dreaming of future awards, when Weeshie turned to me and demanded I take home his Hall of Fame award. I tried to hand it back via family, club, players, but there was no way he’d take that award back.

Weeshie doesn’t do what he does for awards or recognition, he did it for the love he had not just for Kerry football, but for people, ordinary, extraordinary and everything in between.

That’s the difference between Weeshie Fogarty and everyone else and the one thing I will always keep with me. Weeshie Fogarty would always treat you the same way he would treat absolutely everyone. That night in the Legion social in 2016, there were Kerry players, a future Kerry manager in Peter Keane and all the other club officials.

But Weeshie looked at everyone and spoke to everyone and made everyone feel important. In Weeshie’s world, everyone had a story, and everyone was extraordinary, whether you won All-Irelands or served behind the local bar.

I think I could write for days about Weeshie’s commentary, the impact he had, but when you’re writing about Weeshie or even talking about him, you know you are not doing him justice, and you also know he could do it better.

The words ‘legend’ and an ‘inspiration’ are commonly used to describe different figures and different names . . . but Weeshie Fogarty truly was an inspiration and a legend.