Likes of McCaffrey, Kilkenny and Mannion products of the county’s underage system 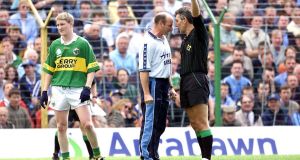 The Point. First meeting since the 1985 All-Ireland final. Semple Stadium has seen plenty days like it, just not these colours, not this foreign sport.

“Dublin still think it’s possible, 64 minutes gone, that was a great point,” Ger Canning screams on RTÉ as the camera pans to Ciarán Whelan with Éamonn Fitzmaurice on his shoulder.

Kerry have been coughing up an eight point lead ever since Vinnie Murphy, their old Kerins O’Rahillys pal, arrived. The stadium is cackling but nowhere near full as trailed back Dubs were forced to abandon cars from Abbeyleix to Newbridge as punishment for being themselves.

“Maurice Fitzgerald is in.”

“It had nothing whatsoever to do with Maurice. They just attacked him when he came on the field.”

A frenzied mood descends and stays. Kerry versus Dublin reborn. Séamus Moynihan gets out in front of Murphy but Whelan lines him up with a clean shoulder. Whelan splats against a granite wall as Moynihan powers on.

Senan Connell puts a quick free in front of a stooping Jayo. Moynihan takes his head clean off and plants it on a spike in front of horrified Dubliners. Boom boom? Sherlock gets up, all shook up.

A pointed free by Wayne McCarthy. Sun is shining. Dublin are humming.

“What’s happened to the champions? They are definitely rattled.”

As was the way with Dublin until Pat Gilroy arrived, goals save them, turn hype into momentum. Turn them into perceived contenders. Of course they were just brazen, talent everywhere except in the point-scoring department, wholly unprepared as Gaelic football changed before their eyes and they stood startled.

The Class Of 1993 – Jack McCaffrey, Ciarán Kilkenny, Paul Mannion – are only learning to bend their backs.

Another McCarthy free drops short but Homan fists to the top corner.

Homan, as Dub as a Dub can be, batters the sky. Dublin by one.

Suddenly this unstructured rural invasion looks to be coming off.

“What a comeback by Dublin, pure heart.”

Maurice Fitz hasn’t been in spitting distance of the ball. Shane Ryan dives at Johnny Crowley’s feet. Kerry wide. Three minutes of injury time signalled as Dublin keeper Davy Byrne shifts a young fella sitting in his flight path behind the goal. The kick out beats Andrews to the sideline about 45 metres out. Number 17 walks over.

“The breeze is behind him but it is blowing over his left shoulder.”

Magic from outside of his right boot. Horror or joy depending on colour or creed.

The replay went to form despite Tomás Ó Sé being sent off. The then Dublin manager Tom Carr now rides a largely uninformed commentary shotgun.

In the midst of the great Tyrone era that followed, Kerry captured three All-Ireland titles. One came during Dublin football’s low water mark of the 21st century. After losing to Páidí’s Westmeath in 2004, they scramble into an All-Ireland quarter-final. Kerry brush past them with seven points to spare. Dublin hit three scores from play. Kerry under Jack O’Connor regained Sam. No rivalry at all.

“Kerry haven’t scored for 15 minutes,” says Darragh Maloney as the clock ticks into 66 minutes. “At that stage they led by six.”

Dublin implode, again. Stephen Cluxton holds the ball for an eternity, soloing way out the field, not a Dublin chest to be aimed at across the vast green canvass. O’Sullivan forces Cluxton into kicking downfield where Kieran Donaghy gathers. A lovely high punt finds O’Sullivan who draws three defenders before Bryan Sheehan then Tomás then Darragh Ó Sé calmly recycle out and across to Colm Cooper. A quick hand pass finds Sean O’Sullivan. Fist. Two point game.

Same old problems as Ciarán Whelan’s last real tilt at making an All-Ireland final ends with a consoling hug from Darragh Ó Sé. Still no full back since Paddy Christie (Ross McConnell’s switch from midfield was properly punished by Seán Cavanagh in 2008). Plenty of flashes in the pan. Still not enough scoring forwards (Both Alan and Bernard Brogan did earn All Star nominations).

Contenders in name only.

Out of St Vincent’s furnace comes Pat Gilroy. He gives Dublin a coherent, modern way to go about their business but not before another Kerry flailing.

It takes 35 seconds for Mike McCarthy to saunter up from centre back and link Darran O’Sullivan to Cooper for a goal that stuns the Hill.

Everything wrong with Dublin in microcosm. With Killian Young, Tom O’Sullivan and Marc Ó Sé all free to carry from deep, Kerry have 1-10 when Alan Brogan posts Dublin’s second point after 27 minutes.

“We seemed to be like startled earwigs in the first 15 minutes all over the pitch,” said Gilroy afterwards. “I think nerves got to us . . .we were just getting killed everywhere. It was showing most at full back, because they were just flooding through on us.”

Same problems but a solution was apparent. The Brogans shared six points although Paul Flynn and Diarmuid Connolly have arrived. Denis Bastick was switched from midfield to fullback but a teenage Rory O’Carroll made his senior debut that summer against Westmeath.

Maybe that’s how it ends.

The Class of 93 enter minor.

“We are overdue,” said Tony Hanahoe on the eve of the 2011 final. “We are 16 years off the mark at the moment. It is nearly time . . . all kinds of interesting things could happen.”

“I’ll go on record: they stole that one off us,” said Bryan Sheehan only last week. “We let it slip through our hands.”

With 62 minutes played, and Kerry ahead by three, Cooper ran at Philly McMahon, feigned to shoot off his left, sold the dummy and put it over the bar with his right.

Ger: “He has a goal and three now and Kerry and their fans will feel they are in touching distance of victory and the All-Ireland.”

Then: Declan O’Sullivan’s hand pass clips Paul Flynn and falls to Cian O’Sullivan in the middle of Croke Park. Two Kerrymen grab him.

O’Sullivan swivels and lasers his free kick to Alan Brogan. Catch, solo, hand pass to Kevin McManamon. Declan O’Sullivan chases the patron saint of lost causes but the St Jude’s man nimbly steps inside him. Marc Ó Sé can’t leave Bernard Brogan. McManamon’s goal cuts the Kerry lead to one. Tom O’Sullivan, under pressure from Bernard Brogan, sees his pass go to Michael Darragh Macauley. Foul. Quick Alan Brogan free to Diarmuid Connolly, who switches play from right to left, to Kevin Nolan. Point. As Kerry once did to Dublin now Dublin do to them.

Bernard sneaks an inch from Marc. Point. Donaghy responds with an epic score. McManamon draws the foul, hugs the ball like it’s a new born. Bernard kneels down, gently taking it from him. Cluxton’s long walk.

34 years since the last Kerry scalp.

Survivors? More a case of who has passed on. For Kerry that would include Tomás Ó Sé, Declan O’Sullivan, Eoin Brosnan, Tom O’Sullivan and Paul Galvin.

Diarmuid Connolly rages against such authority, his shot dropping shy of the crossbar to allow a skinny Mannion slap a goal. Donnchadh Walsh barges into Cluxton. O’Donoghue buries the penalty. 3-3 to 1-6.

Bernard Brogan has never been so alive. He gives Dublin a lead with 20 minutes to play. Brilliant point from Darran O’Sullivan.

Somehow it breaks. Macauley paws it to McManamon. Same man same result. He was never going for a point. Proves it a year later. Jim Gavin just sitting there screwing a water bottle airtight.

The morning after this All-Ireland was won David Hickey, a 1970s man and team medic (organ transplant surgeon too), believed this Dublin was better than his Dublin: “This is a team in evolution. This is not the finished product by any means.”

“I can’t understand people wanting to win 10 All-Irelands. The Kilkenny guys keep coming back every year because they obviously have a huge level of skill and expertise but competitive Gaelic football, the skill level is pretty standard. It’s the drive. No one has won back-to-back All-Irelands because of that. It is the drive and the anger and the hunger to do it. I’m not saying we are going to win for 10 years but I think Dublin are in a position now to compete in the last four for the next 10 years.”

Survivors? More a case of who has passed on. Still, Fitzmaurice fished out Sam Maguire in 2014.

Familiarity breeds contempt now. Spring 2015: Bernard Brogan and Anthony Maher crumble onto sodden Killarney turf with face grabbing and a greco-roman embrace. Mick Fitzsimons gets the full Maurice Fitz treatment for putting Fionn Fitzgerald on his arse. Dublin have not lost since.

McCaffrey ends as footballer of the year then takes off not long after O’Carroll. Dublin readjust. After sparks of excellence against Donegal, having properly returned from his year away, Jim Gavin says that Paul Mannion “is a man now”. Ciarán Kilkenny proves that Dublin without Alan Brogan (or James McCarthy) will drive on. Kilkenny had a year off too. Torn cruciate.

“Myself, Ciarán, Mannion – the few guys from class of ’93 for want of a better word – we came straight in, we were the first group through the development squads,” McCaffrey told Anthony Moyles on the balls.ie podcast this week. “We have pretty much been involved in it since under-14. A lot of the lads involved in it would have done J1s and stuff before being called in. It was great to get that balance [this year] and please God there is plenty of football in me.”

He is 22. Time waits for them because those three are who David Hickey was talking about. The evolution of Dublin through the prism of Kerry matches will never end.