Murphy and Donegal left on the chair when the music stopped 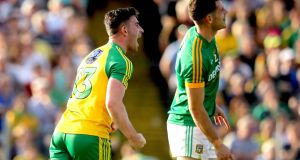 Donegal’s Patrick McBrearty celebrates scoring the winning point late in the Round 3A football qualifier against Meath at Páirc Tailteann in Navan. Photograph: Ryan Byrne/Inpho

A night of thump and thunder in Navan, at the end of which Donegal stay standing and Meath slump to their knees. Patrick McBrearty knifed a point from outside the 45-metre line a minute into injury time to put a full-stop on a game we all presumed had a bit more dash in it yet.

This was always going to be a matter of who grabbed the chair when the music stopped. Nobody was more responsible for it being Donegal than Michael Murphy. The team captain put in and incredible night’s work here, involved in everything the Ulster side could muster. He ended up with five points to his name and hand a hand in another seven. Meath could handle pretty much everything Donegal had but they couldn’t fathom an answer to Murphy.

That was why they lost. Not, as they seemed convinced afterwards, referee Derek O’Mahony. The Meath crowed booed O’Mahony off the pitch afterwards, manager Andy McEntee rushing out to him to jab a finger in his face rather than go shake hands with the Donegal bench. It was needless and deeply ungracious, a sour note at the end of an absorbing game.

This was a clash of two sides who are fair bit down the queue in terms of quality. What made it worth watching was the fact that they’re in or around the same spot in that queue. There were long spells when neither side could figure out how to get out of their own way. They were continually suffocated by indecision, stifled by inaction.

And yet, the struggle to outstrip their myriad limitations made it a thoroughly compelling evening. Donegal’s main route to goal seemed to be a long spell of pass the parcel with the ball around the Meath 45, waiting for Murphy to find room for a shot. Meath left Cillian O’Sullivan in space in their forward line, if being covered by three Donegal defenders counts as being in space.

What transpired was a game that stayed watchable for as long as the teams were close but always threatened to reveal its true self if one or other of them pulled away. The teams were level five times in the first half, another six in the second. At times you would have sworn blind that Donegal were the side more likely to make a burst for it. At others, it was hard to see how they’d ever score again

Meath struggled to get Graham Reilly into the game, their captain ably shackled by Paddy McGrath throughout. Reilly did manage one trademark burst off a Meath shoulder to plant a long-range point after seven minutes but his involvement was curtailed from there on.

Reilly’s fine score put Meath 0-2 to 0-1 ahead and Ruairí Ó Coileáin added another a minute later. But the two-point margin was a fleeting one for the home side as McBrearty stuck a free soon after and Murphy finished off a lung-busting 60-yard run by Eoghan Bán Gallagher with the next attack.

And so it went for most of the game. Back and forth, forth and back. They were level at the break, 0-7 to 0-7. Donal Lenihan was solid on the Meath frees; Jason McGee popped up on the end of a couple of Donegal moves for scores. But there was nothing to pick between them.

You felt a goal would be a big score. But when it came, Donegal had no sooner put it on the board than they conceded its twin at the other end. For Ryan McHugh, see Cillian O’Sullivan. Both goals came from running moves, each side finding space for an extra handpass in among the thickets of defenders. Pádraic Harnan nearly scored the Meath one but his shot was smothered by Mark Anthony McGinley. O’Sullivan nailed the rebound to make it 1-12 to 1-12.

From there, it was a matter of who could hold their nerve. Murphy swapped points with the excellent Bryan Menton, McBrearty swapped frees with Lenihan. Tick-tock, tick-tock. Extra-time a certainty.

Until it wasn’t. McBrearty landed his monster after good work from Ryan McHugh and Donegal were home.