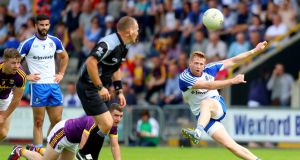 Monaghan’s Kieran Hughes in action against Wexford in the All-Ireland SFC Round 2B Qualifier at Innovate Wexford Park. Photograph: Oisin Keniry/Inpho

Malachy O’Rourke saw his Monaghan side totally demolished Wexford in this one-sided All-Ireland Senior Football Round 2B Qualifier at Innovate Wexford Park.

Wexford finished the game with 12 players, with Ciarán Lyng the first to be dismissed on a second yellow card 62 minutes. Adrian Flynn was flashed a black card four minutes later, with Wexford having used their their six substitutes, to be followed by substitute John Leacy, who was shown a straight red on 70 minutes.

There was no hangover for Monaghan following their Ulster championship exit to Down as they dominated this game, leaving Wexford reeling with a succession of well taken scores.

Having gained the ascendancy early in the game the manner in which they executed their moves against a Wexford side who for most parts had 10 to 12 players behind the ball, suggests that they were a side hurting and it was Wexford who bore the full brunt of that anger.

Monaghan led 2-10 to 0-5 at half-time, but the game was well on the way to being over by the 10th minute when corner back Fintan Kelly got on the end of a sweeping move to finish to the net leaving them leading, 1-3 to 0-1. PJ Banville free had opened the scoring after two minutes, the one and only time Wexford led in the game.

Wexford were unable to respond in the second half as the now Monaghan midfield pairing of Kieran Hughes and Neil McAdam provided the platform for a steady supply of quality ball to the attack. Regardless of how Wexford tried there was never any doubting the eventual winners’ superiority as they led 2-11 to 0-5 five minutes into the second when Brosnan gave the home side a lift with a goal following fine approach play from Kevin O’Grady.

While Brosnan and Lyng pointed a free apiece, Monaghan were refusing to concede as they kicked over some excellent points before adding a third goal through Kieran Duffy. The second-half substitute finished a Conor McCarthy pass low to the net extending his side into a 3-18 to 1-8 lead with 10 minutes remaining, with Wexford unable to match the strength, guile and finishing power of the visitors.

Wexford’s season is over and manager Séamus McEnaney must be satisfied with promotion from Division 4 in his first season in charge.