Monaghan dare to dream after impressive conquest of Ulster 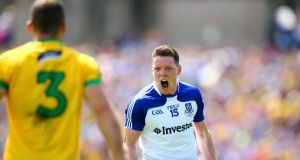 All the Monaghan good-time spots, even Billy Brennan’s barn, threw their doors open for a long and happy Sunday evening. The Farney County are Ulster champions for the second summer in three years after calling Donegal’s number. Again.

Malachy O’Rourke outfoxed everyone to guide Monaghan to a 16th Ulster championship. They trail only Cavan in the history roll but this was about confirming the worth of the present generation.

Just as in 2013, O’Rourke brought his team into the crowded house on the hill with a tailored game plan that will win no haute couture awards but was hard-wearing and brilliantly effective. Although this has been the summer of eternal winters, it was baking here in Clones and the temperatures continued to rise as the teams jousted in their third consecutive final.

“It is sweeter,” O’Rourke said afterwards, stepping into the cool of the tunnel as the Monaghan fans converged on the pitch and straining to be heard over the gathering Monaghan supporters, who chanted: “We want Sam.”

In the stands, they were smiling at their chutzpah. But they have played themselves into the conversation now.

“The first time around, it was nearly a shock to a lot of people. We felt we could win it, but there was amazing exhilaration and celebration. This is more about fulfilment. It was just proving to ourselves and proving to everyone that we could come back and beat a quality team like Donegal. And we are delighted to be able to prove that.”

There was no element of surprise in this. Even the youngsters in the crowd of 31,997 knew what to expect as the crowds gathered to go window-shopping along Fermanagh Street from 11am.

Both counties came equipped with iron-curtain mindsets. Monaghan took a deep breath after Donegal cut them open for three pretty scores in the first five minutes, and then went about their business.

Not long after the whistle, the announcer declared that a set of keys had been found on the pitch. They might have belonged to Donegal because their engine stalled completely in the first half as Monaghan set about convincing them that the cup was set to stay in Kavanagh country.

Vinny Corey was once again tasked with hounding and shadowing Michael Murphy to distraction. He did so. Kieran Hughes was told to drag Eamonn McGee all over the field - and thus leave the brother Neil exposed to the unearthly range of kicking skills which Conor McManus brings to the game.

The Clontibret man was sublime here despite the most diligent dissuasion from Gweedore’s keenest man-marker.

“That’s the thing about Conor, great fella and great gentleman, but sometimes people forget that there is a tremendous determination and tremendous will in him,” said O’Rourke.

“ He was getting preferential treatment at the start of the game, not in a bad way, but he was being marked very tightly. He wasn’t prepared to give in and not prepared to stand about and take it and he got going and he scored three from play. That’s the mark of the man, he came through strong.”

They all did. The Monaghan 15 became visibly emboldened in the first half as they ate up Donegal’s early lead and then went on to lead 0-8 to 0-4.

On the half hour mark, Ryan Wylie legally mugged Christy Toye deep in his own half, smuggled the ball to McManus who floated a beauty for a 0-6 to 0-3 lead. Minutes earlier, McManus had been on the ground wrestling with McGee. There was bloodlust in the local response.

Donegal found themselves in a dark place at the break: trailing 0-8 to 0-4 and seemingly clueless as to how to cope with the Monaghan template.

Somehow – mainly through the quiet heroism of Neil Gallagher and the sharp running of Frank McGlynn and the McHugh brothers – they slowly fought their way into contention and fired four points in a row to trail by just 0-10 to 0-11. A brave attempted equaliser in the 72nd by Patrick McBrearty – Donegal’s only live scoring threat on the day – had the Donegal supporters rising to acclaim a draw and another opportunity.

Some of the Donegal backroom staff did a jig of delight on the sideline but manager Rory Gallagher had read the flight of the ball and turned away, breaking their hearts by signalling wide.

“It wasn’t just one wide, it was a lot of wides,” Gallagher said as Monaghan celebrated, drenching each other with water as if it was champagne.

“It’s something that we very much cherish and wanted to win. To get another day out, I felt the way we played in the second half I thought that would had been merited.

“It’s just disappointing. We came here with high expectations hoping we would put in a performance good enough to win but we weren’t and fair play to Monaghan.”

It was a gut-wrenching moment for Gallagher after negotiating his team through the mean streets of Tyrone, Armagh and Derry. Here, he discovered an old truth. Donegal find Monaghan a sticky proposition when it comes to football.

Across in Hyde Park, the scoring was of a more abundant rate. If Mayo’s faithful were slow to warm to the new model army of Pat Holmes and Ray Connelly, they may have changed their tune after the whopping 6-25 to 2-11 win they delivered against Sligo in the Connacht final.

The score line sounded positively sinful after the more austere fare in Sligo and immediate rekindled conversation about whether this could be Mayo’s year. Around Monaghan, they are entertaining similar dreams.

Liam Toland: Astute kicking game helps England establish a stranglehold 06:30
Ken Early: Guardiola eyeing what could be a last chance for European glory with City 06:00
Galway’s ‘massacre of a beating’ on Tyrone a statement of intent to Dublin 06:00
Magic Wand in the running to conjure Riyadh win 06:00
Six Nations: Pitch-perfect England expose character flaws 06:00
Crossword Get access to over 6,000 interactive crosswords