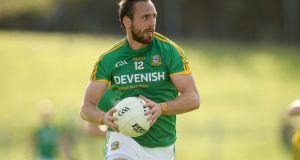 Meath eased their relegation worries following a crucial win over fellow strugglers Down at Páirc Tailteann.

Meath now need to get something from their rescheduled game against neighbours Louth to avoid the drop - providing Down beat Tipperary.

The hosts got off to a whirlwind start with two goals inside the opening three minutes. Donal Lenihan converted a penalty following a foul on himself inside a minute and then Graham Reilly slapped a Cillian O’Sullivan pass to the net.

Down went 11 minutes before Donal O’Hare opened their account from a free and they reduced the deficit to three points at one stage before Meath finished the half leading 2-7 to 0-8.

The visitors never seriously threatened a second half revival as Meath remained at a safe distance throughout.

The game was deep into added time when substitute Sean Tobin struck for the winner’s final goal.