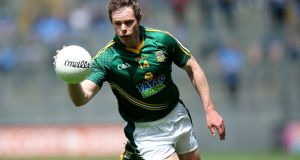 O’Mahonys put back to back titles together after holding off Na Fianna’s late challenge at Páirc Tailteann on Monday.

The Navan side, who were picking up their 20th title, seemed to be coasting to an easy win when leading by 0-12 to 0-6, with five minutes left.

However they had to face a few anxious moments in the closing minutes after s late Na Fianna rally.

Ethan Devine started the revival with a point from a 45 and then on the hour mark he drove low to the O’Mahonys net to bring his side within two points.

Then in the first of two added minutes Daniel Queeney pointed a free to leave the minimum between the teams.

However, O’Mahonys remained composed and Stephen Bray shot the insurance score just before the end.

The holders led 0-6 to 0-3 at the end of the opening half but had goalkeeper Marcus Brennan to thank for two fine saves, including one from a penalty.

Brennan guessed correctly to keep out Daniel Queeney’s 16th minute spot kick and he then denied Barry Clancy with another fine save close to the break. Three successive points within six minutes of the restart extended the lead 0-9 to 0-3 and O’Mahonys were comfortable until that late Na Fianna surge late on.

Neil Lennon insists he is the man to turn it around for Celtic 08:58
Billy Burns named at 10 to face Georgia; Errors cost Dundalk against Rapid Vienna 08:00
Andy Farrell looking forward to some selection headaches come the Six Nations 06:00
The day a 20-year-old Maradona led a League of Ireland XI a merry dance 06:00
Johnny Watterson: Flaws of sporting gods make them just like us 06:00
Crossword Get access to over 6,000 interactive crosswords