Mayo’s consistency can see them through 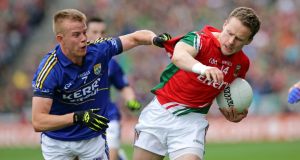 Having started with what he described as the “bizarre” decision to stage this evening’s All-Ireland football semi-final replay in Limerick’s Gaelic Grounds, Mayo manager James Horan’s week ended on an even more bizarre but infinitely more agreeable note, the unexpected absolution of Lee Keegan’s red card on the basis of a dubious technicality.

The outcome is a nice lift for Mayo going into the replay and restores some momentum to the team after last weekend’s roller-coaster in Croke Park.

Although it was a match that both teams had a shot at winning there was a sense that it was more disappointing for Mayo not to have closed out a match they led by five in the 67th minute.

Against that they staged a magnificent rearguard action in the second half when a man down, a performance of such resilience against quality opponents that it ranks as one of the best of Horan’s years in charge.

The manager accepted afterwards that elements of the tactical approach needed tweaking. There did appear to be an overemphasis on containing James O’Donoghue in the early stages with Tom Cunniffe constantly in attendance to supplement Keith Higgins.

With the half forwards also sitting very deep, Mayo had difficulty getting the ball into their full forwards, who started the match well when in possession. It also left Michael Geaney free to drop deep himself and get on to a lot of uncontested ball.

Furthermore it effectively enabled the Kerry option of going for long-range points which was exercised quite a bit in the first half. It was only when down to 14 and throwing caution to the wind that the Connacht champions hit top gear.

Their strength and running game put Kerry firmly on the back foot and got them close to a great result.

Although both teams have named unchanged line-ups it’s reasonable to anticipate that there’ll be alterations before the throw-in. For instance given that Jason Gibbons was replaced at half-time last week having been introduced as a last-minute change, it’s a more than possible his replacement Tom Parsons might start.

Debate around Andy Moran has to take into account that he has been more influential coming in off the bench than starting but also that Alan Freeman doesn’t look like he’s thriving in the stop-start status he’s currently being allocated.

In Kerry’s case, Eamonn Fitzmaurice doesn’t usually interfere with announced teams but with a six-day turnaround this isn’t a routine match.

Having missed the Galway quarter-final, Stephen O’Brien came back but had to be replaced the last day. Word is that he’s spent time in an ice chamber this week and that participation will be touch and go.

Mayo looked the better team when they finally located their ‘A’ game but otherwise they were on the back foot. It took a long time for the expected dominance in the middle third to materialise, as David Moran and Anthony Maher outperformed expectations and Kerry were tactically sharper in the half lines during the first half.

The Gaelic Grounds is smaller than Croke Park and so will give James O’Donoghue slightly less room for manoeuvre.

As a team in development the Munster champions can’t be sure what room for improvement they have but Kieran Donaghy’s introduction at the end has suggested to Kerry that the former Footballer of the Year might have rediscovered his potent form of old.

Ger Cafferkey made his early name of the back of a couple of good performances on Donaghy, then nearer his pomp, but the Mayo full back, whose form anyway hasn’t been optimal this season and who struggled at times with Paul Geaney, was carrying a knock late on and not in the best shape to tussle with the Stacks forward.

The view here is that Mayo should make sure this time. If Kerry gave a more inventive tactical display, the corollary is that Mayo have now survived it.

The greater consistency Mayo have shown in the past few years can take them to a third successive final.